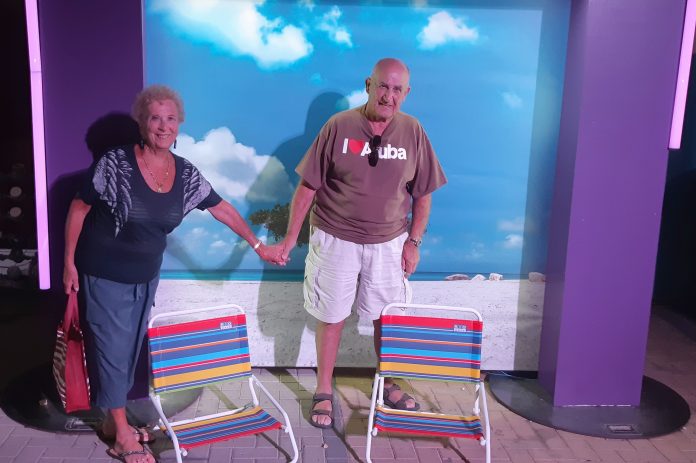 Nine years ago Joan and Sal Fusco met on Aruba and fell in love. Now, they are celebrating their eight years of marriage on our One Happy Island, a slogan made true by the love couple. This is a story about happiness, love and positivity. Aruba Today congratulates the wonderful couple and hope their great energy rubs off on many more of us. Love knows no boundaries and that is proven by Joan and Sal!

Joan and Sal got married at the age of 72 (he) and 73 (she) after being widowed for a few years. Since the late 1980’s, Sal and his wife Theresa had spent their vacations on Aruba every year and decided to purchase two weeks of timeshare at the Aruba Beach Club. Joan and her husband John Ward were also frequent visitors over the years and stayed at the Palm Beach area. After 47 years of marriage, both Joan and Sal lost their spouses in respectively 2005 and 2008.

Both did not expect at all to find romance again, moreover it never occurred to them to marry again. But love finds its own way and the link here appeared to be Joan’s sister Paula. She owned a time share at Aruba Beach Club like Sal and they have become friends. When Joan joined her sister in her vacation in 2010 she was not aware of the life-turning effect this vacation would be to her. “I came to relax on the beach, enjoy dining and unwind a bit in the casino”, she said. This happened to be the same intention Sal had with his stay on Aruba. But destiny decided otherwise and the first night of their vacation they were introduced by Bobby Connearnet, Sal’s cousin. When they met again the next day they became instantly inseparable and Joan even extended her vacation. Back in the States, Sal knocked on Joan’s door the very next day of his arrival. He lived only half an hour from Joan’s home. After being constant companions sal decided to tie the knot and asked her to marry him. The couple married in September 2011 and since then visited Aruba whenever possible. Their combined family of five children and many grandchildren contribute to their happiness.

“All we do is laugh and have fun. We never expected anything like this to happen. We have such a good time”, Joan says. To Sal this wedding is very special and the words during the service are meaningful. “The sentence ‘till death do you part’ weighs different when you marry young, but to us this is reality now.” They both are grateful to spend their last years of their lives filled with this love for each other. It feels like their love rejuvenates them as they are into anything now. “I hope we empower others to still believe in love, even if you lost your beloved wife or husband. Life is not over. You can love again and enjoy and share life with someone new.” q