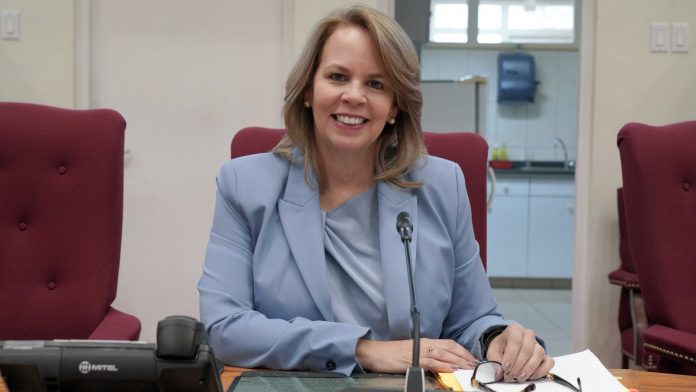 During a meeting in Parliament to discuss the Najaarsnota 2022 (Autumn note), prime minister Evelyn Wever-Croes gave information and answered questions regarding the developments in San Nicolas.

Lighting in San Nicolas
The situation with lack of lighting in San Nicolas is a problem that so far has not been easy to fix, the prime minister explained. It was possible to ‘here and there’ fix the existing problem, but right now the issue will be handed over to Utilities so that (electricity company) Elmar can take care of it.

According to the prime minister, one of the challenges is the lack of funds to achieve a lasting solution, because currently the government has to reduce its operational costs.

It is important for the community to realize that the reduction in operational costs means a reduction in investment. Prime minister Wever-Croes explained that Elmar promised that they are finalizing the business model in order to take the problem over. Elmar will begin with the areas of Bernhardstraat and Mainstreet, installing light posts that they can work with themselves.

Regarding the hotel Secrets Baby Beach Aruba, premier Wever-Croes explained that the developers had to stop the construction of the steel structure that was going because of a case in court. However, after the last verdict of the judge allowing them to continue, they could not just restart again because of certain planning, and so they had to wait for another period. She understands that right now they are back to working on the steel structure once again in order to continue with the job.

Regarding the hotel at ex-Esso Club, her colleague minister of Tourism, Dangui Oduber indicated that the project is in the ‘option’ process, and during this, it must meet certain requirements. These developments are being closely followed to ensure it becomes a beautiful and successful project.

Another topic on which the prime minister received questions was Carnival Village. Regarding this, premier Wever-Croes asked for the plans that were made back when Carnival Village was designed in order to see what the intentions were, to share with Parliament and see where improvement can be made so that it serves its purpose. The intention is to build a wide podium on Carnival Village but this hasn’t taken place yet because of lack of funds.

Prime minister Evelyn Wever-Croes finished saying that these projects, as well as all other ongoing projects in San Nicolas, Have her attention.

Aruba Marriott thanks its heroes Antonio Ras and Tisha Powell for...