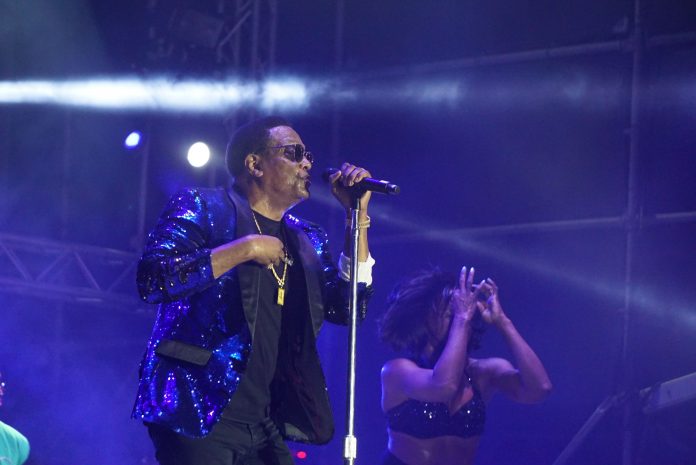 A Focus on the world’s best Beach Party

ORANJESTAD — Whether it is with laughter or with music, last Friday and Saturday night’s Soul Beach Music Festival touched souls. Deon Cole and Aida Rodriguez put some smiles on faces during Friday’s Comedy Night and R&B legend Charlie Wilson and Grammy Award winner, H.E.R., were a motivation to the public to indulge in music on Saturday night. With the foundation of a solid organization behind the scene, Soul Beach Music Festival is all about enjoying great music with the back drop of a tropical paradise. Charlie Wilson has had quite a journey in life. After hitting rock bottom with addiction, he grasped an opportunity to make a life-change that takes him on stage, now at a stage of 23-years of sobriety. His show is uplifting, dynamic and enhances a lot of interaction with the audience. He is still full in the game and gave it all Saturday night; nevertheless Aruba’s heat must have been an extra challenge to the artist. H.E.R. won two Grammy Awards this year, and the young artist managed to show the audience the reason for that.

Her voice is pure and strong and her performance very cool and no-nonsense. “I love Aruba, it is so diverse in cultures,” she said to the press. “If I could change anything with my music it would be the way we treat the planet right now. We ruin a lot for generations to come with a lot of animals that won’t exist and places that won’t exist.” She got to hear more of Caribbean music being in New York and she felt the vibe and that laid-back kind of way, as she explains. Working on her first official album she reveals that we can prepare for a more musical output. Most people think the first night of the Soul Beach Music Festival is Wednesday’s kick-off mixer. Well, the truth is the Comedy Night on Friday is the real fire starter.

This showcase has become the who’s who of humor. This year’s show featured Deon Cole. Yes Charlie, from the ABC hit comedy show “Black-ish,” and Aida Rodriguez. His memorable show will go down as one of the best ever at SBMF. Cole brought a bag of laughter to our One Happy Island on Comedy Night. “Laughter is medicine, nobody wants to be sad,” he tells the press. Before we get started, let remove move the status, up-and-coming. She has officially, “made it.” Aida Rodriguez, the Afro-Latina comedian has a straightforward brand of humor and at the same time, an empowering style to her culture, and especially, to women in general.

“I just want to be a great comedian, not particular a great female comedian. But still I need to work twice as hard. As a woman, as a Latin-American I have been always at the bottom of the totem pole. ”You are only as good as the company you keep,” she says. She has been always around great comedians and states she is only going to rise to the greatness she is surrounded with. “You just gotta brush it off and keep going.”

Stay tuned for more Soul Beach Music Festival news in our next edition.q