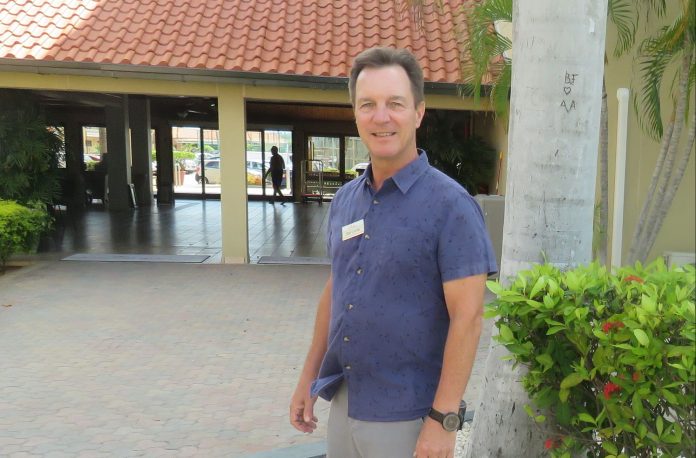 Casa del Mar Beach Resort & Timeshare offers you paradise: an oceanfront location on the white sands of Eagle Beach, the amazing aquamarine Caribbean ocean, wonderfully luxurious oceanfront, or poolside timesharing suites with a world of amenities like a spa, restaurants, and a fitness center. Responsible for the overall operation of the resort is General Manager Bob Curtis, the captain of the ship. If troubled water occurs, he will steady the ship. His philosophy: to give the people the best tools to do the job.

With more than 100 employees under his supervision, Curtis is assured to keep busy although it does not appear. Friendly, warm, kind and patient would best describe this GM and those characteristics fit in the atmosphere of the resort as well. Whomever you ask about their job, all of them talk about the connection among colleagues and members like family. What is the secret of Casa del Mar Beach Resort & Timeshare? Curtis: “I do not know if there is a secret recipe, but I do know the right people are on the right spot.” He states that up to the board of directors in the U.S., it goes unspoken that people bond here. “The comments cards we get may have complaints, but never about the employees, are they not to be touched. Members even get mad when we switch housekeepers around. It is amazing how strong the connection is.”

Strict but Fair
Curtis believes in being strict but fair, relaxed and yet driven but most of all, listening carefully. “From my start here five years ago we gradually built a team. In my opinion if you want quality you need to provide employees with quality tools and rules. It makes the job easier and shows the best result. “That was the reason he implemented the 5-days working week. “Imagine that housekeeping staff used to clean rooms six days a week and what do they do on their day off at home? Clean their house of course. So we made it work within five days without increasing costs. It required some changes, but in the long run happy employees make happy clients.” He shows appreciation for his employees, also by reflecting in the activities amongst colleagues like anniversary celebrations, the Casa del Mar Week and holiday gatherings.

Curtis came to Aruba in 1991 when the Sonesta Hotel was opening. “I came down on a task force as I was a financial controller in Orlando and stayed for a couple of weeks. I happened to meet my future wife here. Back in Florida they called me a couple of months later to replace the financial controller who was taken out in handcuffs by immigration and put on a plane.” He explains that in those times you started working before you got your permit, companies did not have the luxury to request a permit and have the people wait overseas. “I was in the same situation and every once in a while the front desk would call me to warn immigration is here. I literally had a backdoor in my office and I needed to hide,” he laughs.

Goals to Get
1993 he went back to the States, got married and returned to Aruba in 1997. “22 years later I am still here.” Bringing Casa del Mar forward in every sense of the word is his goal. At the moment the resort is undergoing an extensive renovation. “The building exterior is part one. It wasn’t maintained properly over the last 30 years so the panels started to rust and crack. We are fixing that completely. Inside we changed all the furniture and appliances which is part two. We do it well now, not step by step. Part three will be the bathrooms interiors.” Besides the operational part, one of his listed goals is to stay connected with local community and engage the employees in that part. “We are part of the new Happy Community Initiative and we organize activities where we support employees’ children with school supplies for example. We introduced him as captain of the ship but may as well call him the father of the family, because at Casa del Mar Beach Resort they are one big family.

“I love to observe people and see if they fit”

“I believe in building spirits”