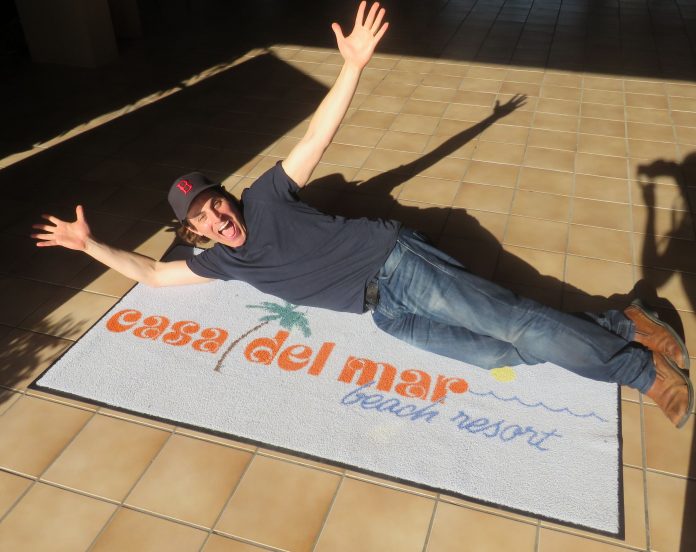 Casa del Mar Beach Resort & Timeshare offers you paradise: an oceanfront location on the white sands of Eagle Beach, the amazing aquamarine Caribbean ocean, wonderfully luxurious oceanfront, or poolside timesharing suites with a world of amenities like a spa, restaurant, and a fitness center. You take a vacation to unwind and now the resort offers you the best medicine: laughter. Aruba Ray’s Comedy Shows brings the best of the best comedians from the United States to you! Take this golden opportunity to see several of the best comedians in one night. “The line-up honestly is equal to the best comedy shows of New York,” says Ray Ellin, producer and host.

Stress relief, from laughter? It is no joke. Laughter, it’s said, is the best medicine. And there’s lots of evidence that laughter does lots of good things for us. It reduces pain and allows us to tolerate discomfort. “It feels good to make others feel good.” Ellin is a kind of half- Aruban so to speak. Well, he lives here almost half the year, and his nickname is Aruba Ray. The American comedian, host and producer lives the other half of the year in New York. He produces a popular TV show for Comedy Central and here on One Happy Island, he creates, produces, and hosts a very successful nightly stand-up comedy show called Aruba Ray’s Comedy.

“I really think I became the number 1 ambassador for Aruba in the States. When I am on different TV shows like on NBC and Fox, I always talk about Aruba. I love it, it’s a part of my soul.” He wants people to know how much he loves the island, and does the best he can to promote it. He also brings the top comedy acts here that are followed by many people. He takes the comedians around to show them the Aruba outside the resort. Ray is happy here during the day, enjoying his Aruba, and during his shows in the evenings making people laugh. “It is a great feeling, a positive affirmation. You know that you make other people feel good and that makes you feel good. There is just one big positive vibe in the room. Of course that feeds your ego. It’s great energy.”

Unique Line-Up.
The comedians he brings here are not just any names. They are experienced, very talented performers, who have been on dozens of TV shows and movies. “This run of shows will include Chuck Nice who is on TV in the States four, five days a week among other on NBC’s Today’s Show. We have Kathleen Dunbar from Las Vegas, she is excellent and I know people will love her. Robert Kelly has been on every major TV show like the Tonight Show with Jimmy Fallon and he performed at Boston Garden with 18.000 people. He is hugely popular. Jim Colliton is really great and we have John Fisch who was at the Letterman Show and Comedy Central. Tony V appeared in Seinfeld, Late Night with Conan, in the movies ‘The Town’ and ‘The Heat’ and ‘Daddy’s Home 2’. The amazing Christene Hurley is here and also Dan Naturman, who was the finalist in America’s Got Talent.” Many have been here before says Ellin and they love it. This is a one time opportunity to enjoy the best quality, standup comedians in one night. “My name is all over this so it has to be great. I happen to have a good track record and I’d like to keep it that way.” He’s been doing this now for six and a half years. “This island is everything to me.”

At Casa del Mar Beach Resort & Timeshare they show not to be afraid to try something new. This is the first time the Aruba Ray’s Comedy Show will perform in a timeshare resort. “The GM Bob Curtis and I met in 2013 and since then he has visited my shows every year. Here, I have a great night club-like room in an intimate ambiance with the possibility of an open bar, pre-show dinner at restaurant Matthew’s and of course the show. We are on from December 2 till December 20, 8:30pm every night except for December 8 and 14. Check the schedule at www.ArubaComedy.com.” Curious about Ray and his fellow comedians? Visit the show and let your smiles flow. To Ray it is all clear: “If I am not on stage for a week, I feel weird, it’s a part of my system. Eating, breathing, performing.”