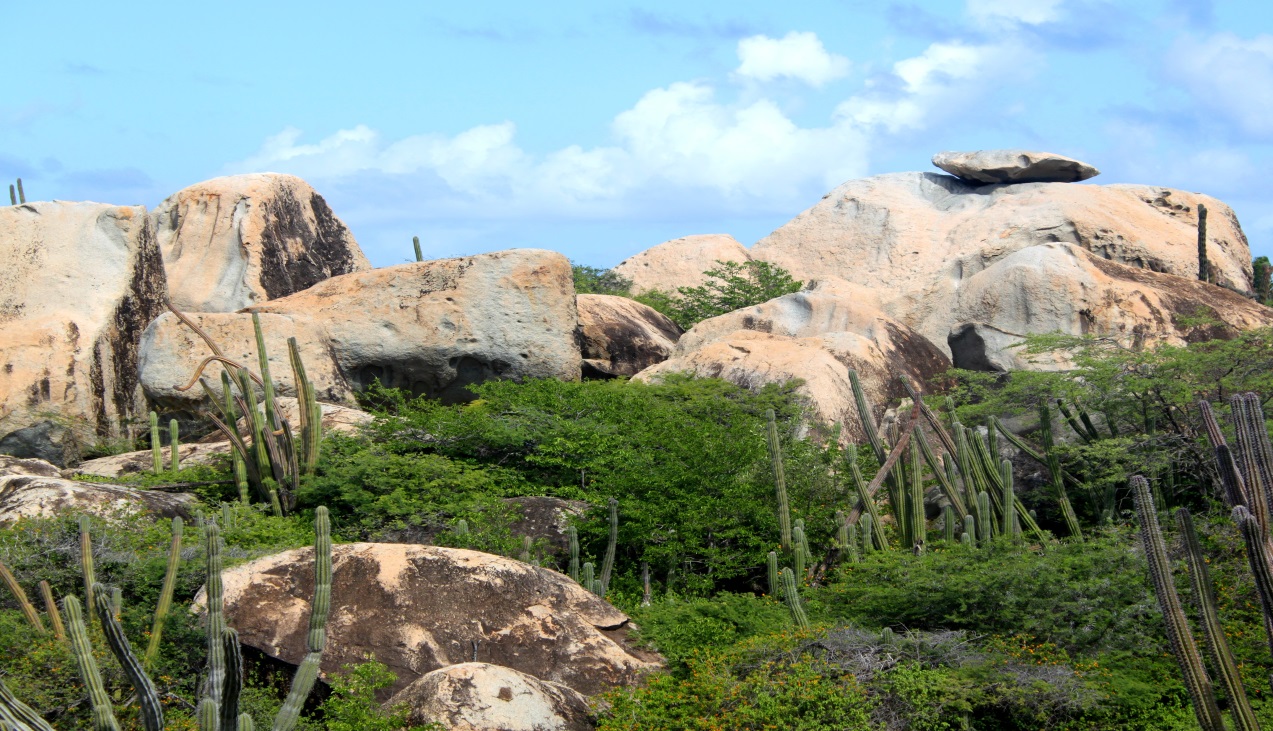 Hi guys good morning. Together we can all be Aruba’s rangers, guardians of our patrimony. Let’s create a consciousness that rock Art is our heritage; yes, much more than just meaningless doodles made by our Aruban fore fathers. Contrary to popular belief it was not created by some underdeveloped cannibal inhabitants of mythical epoch, it does not reflect buried treasure maps. Neither were they meant to just scare demons or bad spirits away. What rock Art in general does provide is means of understanding the sacred as well as the mundane perspective of life “in our case” with what prehistoric Amerindian cultures as a community could regionally and specially insularly have experienced by means of rock art expressions and practices relating to it. Here we can examine something in great detail in order to understand it better or to discover more about it, windows for analyzing cultural interaction through symbolic patterns.

The pre historic artist had the goal in mind to inform, create beliefs and handing over knowledge among peers. Communication abilities were a valuable in trade and commerce among neighboring tribes like a way of life. Rock art was also a way of telling stories and archiving it for future generation`s use. Changes in rock art styles often reflect new ideologies and/or religious practices. The quality of the rock art and the level of sophistication of the culture it belongs to are not necessarily related. Petroglyphs are less common than Pictographs. Only one site has been discovered and is accessible to public. The incrustations are found on the dark, exposed surfaces of a granite builder at a site known as Siribana (No.2) The top layer or surfaces of the rock served as the base color for the abstract representational of the ”Mythical twins” supernatural beings also referred to as alien figures. Abstract figures that were used by hunters and gatherers in the oldest known new world rock Art bear no resemblance to the real world. Pecking into the rock to create Petroglyphs was accomplished with a hammer stone or stone chisel. Different pecking techniques created different styles. Incising or scratching with a sharp tool was also practiced. Incised designs are more expressive and detailed than pecked designs. Pictographs are usually created on light colored, protected from the elements granite, Quartz Diorite, surfaces or on limestone walls and caves ceilings. Stylized animals, humans and geometric object designs are common subjects. Pictograph pigments and binders were probably obtained from soot, vegetal pigments and blood or pulverized minerals. While even some sea snails could have provided a purple reddish stain. Binders were used to stabilize the coloring material and allow it to stick to the rock. The colors generally used were red, orange, white and black. Red pigment probably came from hematite or iron oxide; orange from a combination of hematite, ocher, limonite, lichen or Brazil wood. Other sources of pigment included white clay, silica, gypsum, chalk, calcium carbonate, and charcoal. Pastels were created from clay mixed with other minerals. Water was used to create consistency but the binding agent could be anything from saliva, to vegetal juices and vegetal oils, to a mix of water and calcium meal, tree gums, even the whites of bird eggs or guano were employed in many regions of the world. The surface of the rock was sometimes smoothed and abraded in preparation for painting. Tools were sticks or probably brushes made from the tips of agave leaves chewed or beaten to remove the pulp, leaving vertical fibers for painting small solid areas, clear lines, and other fine details. Wider areas could be painted for example with a corn husk or cotton wrapped around the finger or even the finger itself depending on the time frame which these where made. Dots were applied with the fingertips. Entire hand prints could have been created using for example a stenciled design by spraying or blowing the paint around the hand that has been placed with spread fingers on the surface of the rock. The official Native rock artist was often a mystical Medicine Man, herb mixer, the color maker but most probably because of his power to heal and communicate with the supernatural. A continuation of the early shaman, endemic believe to most tribal societies, most likely survived from before the migrations across the Bering Street over twenty thousand years ago.

Discover an Aruba that no other could share with you. Our renowned indigenous and educative session has been entertaining curious participants for decades. Mail us at etnianativa03@gmail.com to confirm your participation at our facilities, close to the high rise Hotels area, and take this experience home with you.