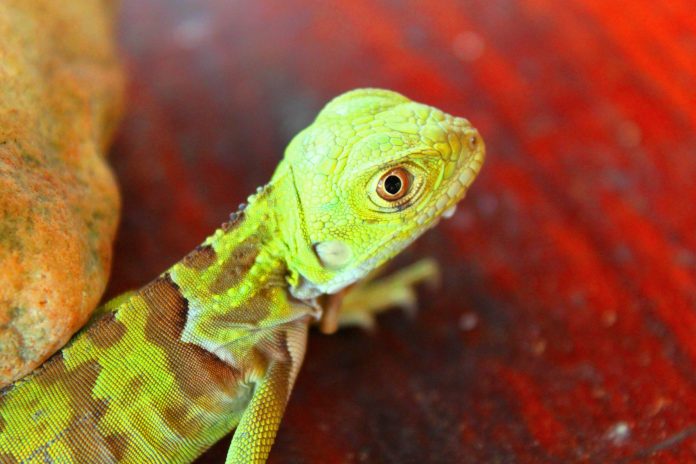 They are a genus of herbivorous lizards native to tropical areas of Mexico, Central America, South America, and the Caribbean. Two species are placed in the genus, the green iguana, which is widespread throughout its range and a popular pet, and the Lesser Antillean iguana, which is native to the Lesser Antilles. Iguanas can range from 5 to 6 ft in length, including their tails. These lizards possess a dewlap and a row of elongated scales running from the midline of their necks down to their tails. Iguanas have varying types of scales covering different areas of their body, for example, some large, round tuberculate scales are scattered around the lateral region of the neck among smaller, overlapping scales. The scales on the dorsal trunk of their bodies are also thicker and more tightly packed than those on the ventral sides. These scales may be a variety of colors and are not always visible from close distances. They have a large, round scale on their cheeks known as a subtympanic shield. Iguanas have keen vision and their visual acuity enables to locate food. They employ visual signals to communicate with other members of the same species. The tympanum, the iguana’s eardrum, is located above the subtympanic shield behind each eye. Iguanas are often hard to spot, as they tend to blend into their surroundings, and their coloration enables them to hide from larger predators.

Like most reptiles, they muscles are fast twitch and allows iguanas to move very quickly. Iguanas are really fast and are known to run even at a speed of 21 miles per hour at their maximum. They can run really fast and are known to escape easily by running and with the help of their parietal eye to identify the predator and this also helps them to catch their prey. They generally live near water and are excellent swimmers. If threatened, they will leap from a branch, often from great heights, and escape with a splash to the water below. Iguanas themselves are eaten by a variety of natural predators—hawks, owls, snakes—and humans. Green iguanas are bred and raised on farms in Central and South America to be eaten by people. Young iguanas are particularly vulnerable to predation by feral cats, and no iguana is safe from a pack of dogs. The Iguana is considered a delicacy in some latitudes, there is a complete menu with its meat being a typical dish of some regions of Central America, Mexico, Colombia and Venezuela among other countries including our own isand. Its meat is equal to chiken while some say that its flavor is like of rabbit meat and its skin is used to make handicrafts.

In Aruba, iguana soup is well known, mainly for being a rich source of protein and recommended when suffering from the flu or fisical weakness. It is also attributed aphrodisiac properties. Its legal protection has caused many promlems and graet damage to residential as well as comunities ornamental gadens as well as to agriculture area.

Iguanas may make fun pets if an iguana is raised correctly by their owners, and they get their basic needs met, they will be perfectly happy to be handled by people. They often grow to like having their little heads rubbed when things are quiet and calm. This is often the closest that their owners see true affection from their iguanas. They aren’t dangerous or aggressive to humans, but they damage landscape foliage and can dig lengthy tunnels and the bite from an adult iguana can actually bit the top of your finger off, or tear chunks of flesh off, they have a row of small sharp teeth on the top and bottom of their mouths and can inflict a nasty wound with a whip of their barbed tail in defence.

Our goal is to raise cultural awareness, promote education and safeguard our heritage as the sacred mother seed guiding you to be the next guardian of the island. If you love Aruba its origins and its cultural heritage, be part of the exclusive visitors of this cozy home-atelier called “Etnia Nativa”. This private residential houses collections of native art, archaeological artifacts and historic furniture, while the facilities themselves are the result of the transformation of recycled materials. Meet this acclaimad columnist, artist and native cultural expert at home! Book your visit Whatsapp + 297 592 2702- or mail: etnianativa03@gmail.com