It’s never too late to find where you came from, and potentially find your family. Dan Bruder tells the story of how he found his sister Pennie Arneson after 65 years, and finally met her here in Aruba. 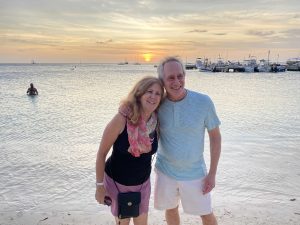 Dan Bruder was adopted when he was just 8 weeks old. His adoptive mother and father along with their family were and are his family, and “that’s all I ever knew. My mom and dad always offered to help me find my biological relatively, and I always said ‘no, I’m good, I’m comfortable’” said Dan. His mother and father passed away a few years ago, but always maintained until the end that they were willing to help him find his biological family. Eventually Dan decided to make use of ancestry, 23andme and such, which led to him being able to see his family tree and all the connections. His results ended up identifying Pennie as a relative, “Dan contacted me and said ‘I was adopted and I checked my family and it says we’re related’ and I said I’m not really sure how,” Pennie expressed.

He then explained to her that he’s also related to another person who then Pennie told him was her son, expressing that “if you’re related to me, you’d be related to him”. He continued telling Pennie about the other people showing up, and mentioned Debbie, who is Pennie’s sister, which helped her conclude that Dan was her relative from her father’s side, “his DNA is actually closer to me than my sister Debbie who i was raised with,” Pennie added.

This was the start of what would later become the reunion of two siblings, who never knew of the other’s existence before. They started to “communicate and speak often, we facetimed, and then COVID-19 hit so we kind of put the brakes on the idea of meeting.”

Dan and his wife Helene come to Aruba often. They are loyal visitors who have been coming to our island for more than 20 years, and visit us 3 to 4 times a year. Pennie lives with her husband Greg Arneson and their family in Fort Lauderdale, Florida, while Dan and his wife Helene Bruder live in New Jersey. “Pennie saw that we posted pictures of our trip and she said ‘oh I see you were in Aruba’” which lead to Dan telling her they would be coming to Aruba on a trip soon, and Pennie then told him that they would be there as well.

For Dan, it’s the first time he has ever met a blood relative, “I’m 66 years old and I’d never met a blood relative.” When asked what motivated Dan to take the DNA test, he explained that “getting older you recognize the value and importance of family, and I just had that curiosity that started to itch more.” Pennie had no idea she had any other siblings, “At first I didn’t know where he fit in,” said Pennie.

After meeting each other and personally getting to spend with together, the two have realized they have the most peculiar things in common which are very interesting, for instance, they both have Ducks as pets, which are surely not common pets to have, and the most interesting yet funniest thing they have in common you ask? “you know how you get a bucket of fried chicken?, well both of us will remove the chicken and eat the crumbles,” Pennie shared. So now, even the Ducks have gained a relative!

“I feel like I’ve known him forever,” Pennie said of her brother, adding that “there was no awkwardness when we met, I felt very comfortable.” Dan explained that “it exceeded my expectations. It’s such a pivotal milestone and you’re hoping that it’s not someone weird, but it has been amazing.”

It’s a very unique opportunity for the both Dan and Pennie alike, to know how much of who they are and what they do has been influenced by their genetics and not their upbringing, seeing how they we’re brought up differently, but still have very distinctive similarities like the pet ducks and chicken crumbles, “It’s duck’s and chickens, a ‘foul’ relationship,” Pennie joked.

It’s a wonderful story to share, not only because it is opening something personal and starting a conversation about many different wonderful topics, but it’s a story that we can all learn from and take something with us, seeing that it’s never too late to find who we are and where we come from. “If we could be kind of the catalyst to something good, that’s a good feeling,” Dan concluded.