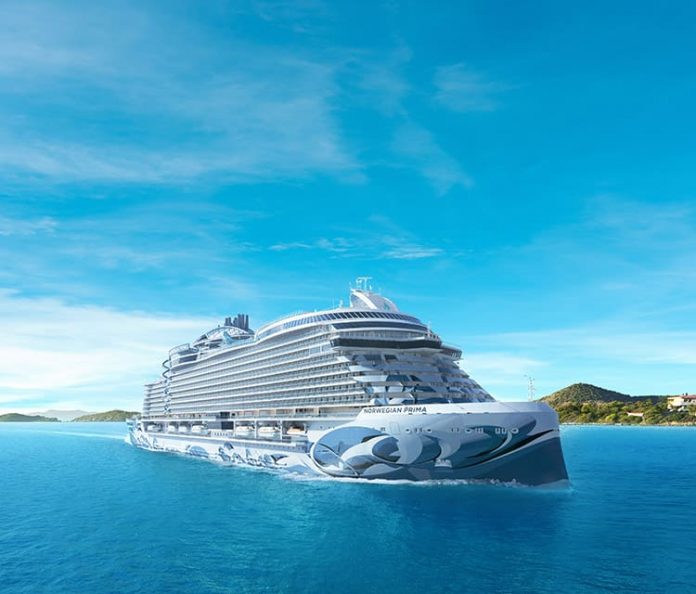 “After a month of preparations, we are finally so far”, Marc Figaroa, director of Aruba Ports Authority NV, announced with pride. This is not the first cruise arrive to our port for the first time this year, and it will also not be the last one. “APA together with ATA and ministry of Tourism are working hard to continue attracting new cruise ships for our ports, in an effort to develop the industry and incentivize our economy.”

According to established plans that are fixed in an itinerary, early this morning the Norwegian Prima will arrive in Aruba. It will dock in our quay until the late hours of the afternoon, when it will raise its anchor to continue in the direction of its next port of call on its itinerary.

“It is the newest cruise in the family of Norwegian Cruise Lines. It has been sailing for almost two months and we already managed to get it to visit Aruba. We expect it once more in the month of November”, Figaroa said.

If everything carries on the way it has been going, Aruba Ports Authority predicts that a level of almost 80 percent of recovery will be achieved when comparing this year to 2019, which was the last normal year for the cruise industry and a record year for APA. The percentage is lower than the aviation industry, but it needs to be reminded that cruise industry took a lot longer before restarting. And contrary to aviation, the pandemic affected the cruise industry two times consecutively, both at the beginning of Covid that paralyzed the entire industry for almost 16 months, and after the impact of Omicron also, which once again caused many cancelations between the end of December 2021 until February 2022.

Even so, the Caribbean region recovered better than other regions and in that, Aruba continues to be one of the favorite ports.

The Norwegian Prima cruise ship carries a maximum of 3215 passengers. The cruise ship has 20 floors, 1646 rooms, 16 lifts and is 299 meters long. It’s called the “Prima Class” of Norwegian Cruise Line and it is the first in six cruises that was ordered in February 2017 in Italy, the first to be completed and began sailing last August.

Aruba Ports Authority NV is proud of announcing that this year, in the context of their recovery strategy, they have attracted one of the biggest cruise ships in the world. Allure of the Seas, of Royal Caribbean International arrived in Aruba last May. The cruise ship, which cost 1.2 billion dollars to make, carries no less than 6400 passengers and 2200 crew members.

When it was built in 2009, it was the biggest cruise ship in the world, 362 meters long. In Aruba, we had to adapt our quay in order to accommodate it. It arrives in Aruba every other week and brings many passengers on board who greatly contribute to our economy.

But Aruba Ports Authority NV is proud to announce that in the month of November and December there will be more first calls in the quay, among others, we will be receiving Celebrity Beyond, Harmony of the Seas, Norwegian Encore and Azamara Onward.

It’s worth adding that Celebrity Beyond began sailing last April, so it’s the newest cruise joining the Celebrity Cruises fleet. It is in the Edge-Class category and has a carrying capacity of 3937 passengers.

Harmony of the Seas is in the Oasis Class category of Royal Caribbean International which will substitute the Allure of the Seas from the middle of November. Norwegian Encore is in the Breakaway Plus-class ship of Norwegian Cruise Lines which will also visit Aruba for the first time. Encore is a relatively new cruise which began sailing in 2019 with capacity for 4903 passengers. Azamara Onward is a 23 year old cruise, it carries 826 passengers, it’s 191 meters long and it’s in the R-Class category. It was renovated this year to begin operating for Azamara Cruises since last May.

According to projections, tied to negotiations made and internal preparations at the quay, in January 2023 Aruba will welcome, for the first time, the Ritz Carlton cruise – Evrima. It is a luxury cruise of barely 149 suites, accommodating 298 passengers. It was a few weeks ago when the cruise began sailing, as the first of three acquired by the Marriott International company.

In the month of June, once more APA will celebrate the arrival for the first time of the Mardi Gras cruise ship. It is operated by Carnival Cruise Line, it cost 1.1 billion dollars to build, was launched at the end of July 2021, measures 340 meters in length and has a carrying capacity for 6500 passengers and 2000 cre members. Mardi Gras belongs to the Excellence Class category and it is the biggest cruise in the Carnival Cruise Line family. Mardi Gras operates on LNG.

Projections based on established agreements with cruise lines for the next year indicate that, barring any changes, Aruba Ports Authority NV will at least reach the amount of cruise ships and passengers as in 2019, which was their best year. “At least” is highlighted because the company is in advanced deliberations with various lines which will probably crystallize next year, now that there is more appetite to sail on a cruise again.

Aruba remains a favored port in the Caribbean, for our crystalline beaches, level of service and safety!

About Aruba Ports Authority
Aruba Ports Authority was founded in 1981. The company belongs 100 percent to the Government of Aruba and has 75 workers in direct service. Together it manages the two quays in Aruba, the cruise terminal in Oranjestad as well as the cargo one in Barcadera, where they have an operation agreement with ASTEC.
Each year, about 310 cruise ships arrive in Oranjestad and another 905 cargo ships arrive in Barcadera – without counting small ships and launch services (before the pandemic0. The company is stable under the management of Marc Figaroa.

Today We Say Thank You