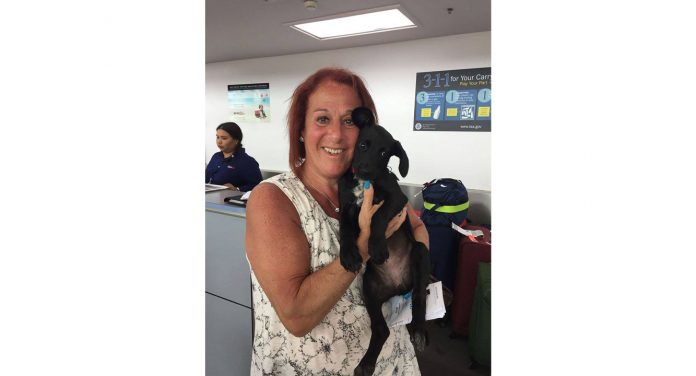 They both are in love. With their second home, their escape to paradise, their heaven on earth. Yes, we are talking about Aruba. For Lois Landau Leeds and Gae Bailey it was an exciting day yesterday as they arrived on Aruba with the first flights from Newark and Boston after the COVID-19 lock-down. Welcome home ladies!

Lois was on the first flight in from USA, this was the 1.25pm arrival with United Airlines coming from Newark, New Jersey. “I own a house in Aruba for thirteen years. My experience with the preparation for the trip was a little crazy, I have taken the COVID-19 test in New Jersey in the hope that Aruba would accept this test but just to be sure I also bought the $ 75 test. Honestly I just wanted to get this ED card ready and get my green check.” She is so excited and so happy everything is open again. “I absolutely love Aruba, I have travelled to Aruba for 40 years already.” Lois will be accompanied by her daughter and boyfriend and her granddaughter.

Gae Bailey flew in from Boston Logan International Airport with JetBlue and let us know that the Transportation Security Administration (TSA) was very busy but furthermore the Boston airport was empty with restaurants closed. Upon boarding she had to show her ED Card while the flight attendant handed out paper ED Cards during the flight which caused some confusion. Passengers were questioning about it and the flight attendant said she did not know why either but it was no big deal, says Gae. Upon arrival in Aruba they had to stand in one line which took a long time. She was expecting two lines, one for testing and the other for people that had done the test home. Social distancing was in place for this line, but at the luggage belt people were standing close to each other.

Outside of the airport building a steelpan band and carnival dancer welcomed the arrivals to One Happy Island. “I am exhausted, but excited,” Gae states. Ready to go to her relaxing vacation home to let the Caribbean vibes take over.