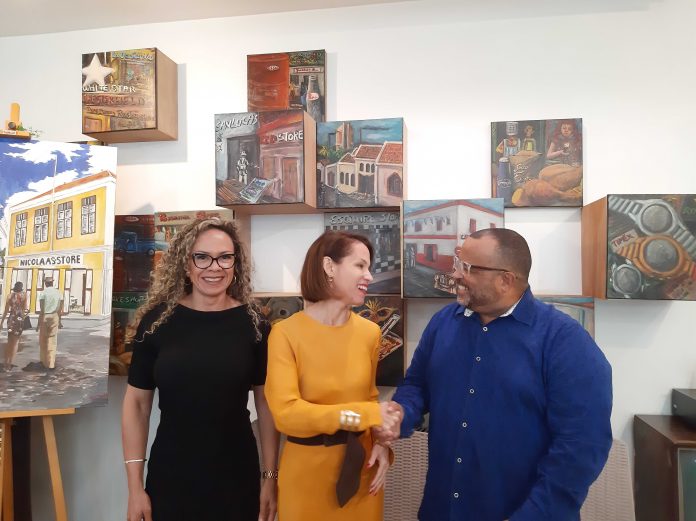 The signing of the MOU represents a great opportunity for San Nicolas as it involves extension of the development currently taking place in the area. New president of SNBA, Errol de Freitas pointed out that the union between these organizations is very important to achieve this development.

He said that there are currently three ongoing projects in Sero Colorado, but there is also the improvement of the entire area of San Nicolas which will take place in the short term. “For us, the MOU means an opportunity to partner with these two organizations for positive development for San Nicolas. We are very proud of this”, De Freitas commented.

Ronella Croes, CEO of ATA said that this process took years and in the middle of it, the pandemic came, which didn’t help. ATA as member of SNBA thanked everyone for their collaboration.

Recently, ATA and SNBA had a meeting to continue the conversation on different topics, for example, Croes said that “it is not a secret that SNBA is also very involved in different developments going on right now.” Often ATA will give an opinion on projects, but also they are trying to involve the community before executing certain projects.

The MOU is basically the formalization of various components, a topic regarding branding. Already before the pandemic, Croes said, they were working on a specific branding identifying San Nicolas. There is Aruba as an image and brand, but they think that San Nicolas – according to Forbes Magazine, is “The Art Capital for the Caribbean”. This also demands from ATA not only to continue the trajectory of giving content to this brand, btu also to work on a separate branding from Aruba, to position San Nicolas differently.

“We not only see it as a part of Aruba and a city that enhances the experience, but it can even convert into a point of attraction to decide to visit Aruba, and this is tied to the MOU”, Croes commented.

They will continue focusing on informing our visitors through the Visitor Information Center, but also through signs, monumental and cultural attributes.

Croes said that a very important part is recognizing also the other organizations that have a key role in the development of the product. Think here about the infrastructural aspect, which is outlined in the MOU.

She also mentioned that the ministry of Tourism is also very involved in the projects in collaboration with the Department of Public Works and Department of Infrastructure and Planning as key organizations for these projects.

In the project at Sero Colorado, in which ATA is integrally involved, there are weekly works taking place to achieve results.

ATA is also involved in the restoration of the pier at Rodgers Beach and recently the steps at Rodgers beach, which were fixed and will get an artistic touch as well. 2023 will see a continuation of these projects for which SNBA is very important.

The cultural aspect is also included in the MOU. Art Fair, a cultural event, also involves infrastructure, according to Croes, because of all the murals and the activities during those days that are visible in the area. “It is the intention of ATA to continue with this, but also to think on how ATA also started the Carubbian festival which later became Island Fest, which is also on schedule for next year regarding ways to bring more movement and culture in San Nicolas.”

Education and training is currently in preparation to improve the work of providing information in the tourism sector, which is also tied to projects in the pipeline. Thought is given to accommodation but also the policy that is desired for San Nicolas. In this regard, a few years ago Aruba Excellence Foundation was established. This foundation encompasses Aruba Certification Program (ACP), among others. Croes said that Aruba Excellence Foundation was included in the MOU to explore possibilities to enhance San Nicolas, but also to explore specific training that will be needed seeing the development of San Nicolas.

“San Nicolas needs to remain as a different product compared to Palm Beach – to mention an area that is specifically very touristic. This is precisely what we want to see for San Nicolas, and this can require another type of training, focusing more on cultural aspects but also a bit deeper in the history of San Nicolas and its surroundings”, Croes said.

Shadey Figaroa, president of supervisory board of Aruba Excellence Foundation, said that she advocates a good and correct education for the community of Aruba, particularly those in the hotel industry, the service industry. “It is very important for us that our community is well educated on the history of Aruba and all the ongoing projects in San Nicolas. We are very happy that together with ATA and SNBA we can sign an MOU to provide the necessary training for commerce and the community of San Nicolas. Our goal is to have the whole of San Nicolas 100% ACP Certified, and we hope that we can achieve that together with the parties”, she said.