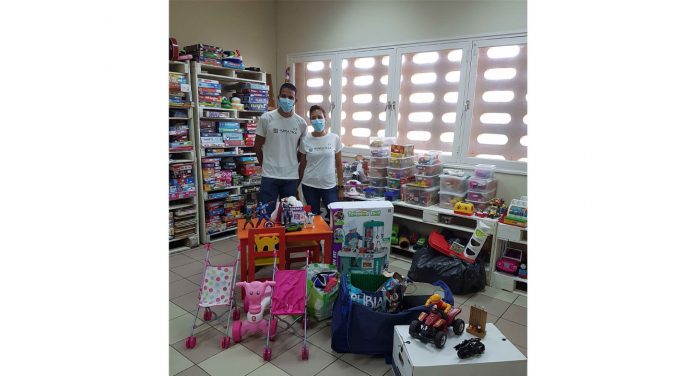 Hunga Teca, meaning playotheque offers children between the ages of 0 to 12 the opportunity to develop their cognitive, creative, social and mental skills through games and toys in a safe and loving environment under professional guidance. Last week the foundation received a large donation of toys and games from couple Naomi Vrolijk and Jeremy Boekhoudt.

The intention of the foundation is lending educational toys and games to children who do not have the means to purchase them. Children have known all along, playing is the best way to learn. On 12th November last, Vrolijk and Boekhoudt did a large donation of toys and games to the Hunga Teca foundation. The couple originally planned a toy run that would take place during the International Half Marathon in September last under the theme #cadakmtaconta (#eachkmcounts). The two had everything in place for this toy run, including the T-shirt they would run in. Unfortunately, the half marathon was cancelled due to the pandemic. Nevertheless, they succeeded in collecting toys and games from family, friends, colleagues and students from the schools EPI and EPB. Hunga Teca is very grateful for the nice initiative of this sporty couple.

Hunga Teca, a place where children between the ages of 0-12 years can borrow toys and games after becoming a member for 5 florin a year, is situated in the YMCA building in San Nicolas. They are open for their clients on Thursdays afternoons from 3.30 – 5.30. On the last Wednesday of the month starting on 25 November, they will be present with games, toys and information regarding the benefits of play at a public playground that will be announced at a later stage.