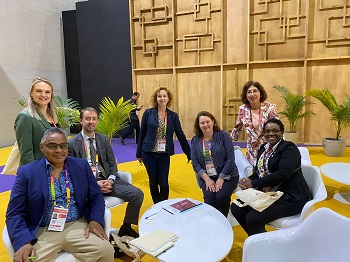 They presented several topics and held several discussion panels. The main themes of the congress concern:

The fight against the climate crisis;

The role of General Audit Offices in emergencies;

The independence of General Audit Offices;

The joint conduct of coordinated investigations;

The role of General Audit Offices in the fight against drugs and crime;

The presentation of SAI reports on the Development Goals, 2030 SDG Agenda, concerning, among other things, the fight against poverty.

Furthermore, they discussed administrative issues for subsequent approval. They include the activity and financial report for the three years 2019-2021, the presentation and the INTOSAI Strategic Plan 2023-2028 approval, and the regional reports of EUROSAI, ARABSAI, ASOSAI, AFROSAI, CAROSAI, OLACEFS, and PASAI. It is important to note that they expelled the membership of the Netherlands Antilles.

Participation in the XXIV INCOSAI Congress was very intensive. In addition to all the meetings, discussion panels, and gatherings, the Aruban delegation maintained many contacts and made new ones with members of sister institutions and regional organizations. These include SAI Brazil, Egypt, South Africa, Latvia, Philippines, Turkey, Peru, Chile, and Mexico, also with IDI, US GAO, and UNDESA. They also held meetings or discussions with colleagues from CAROSAI, OLACEFS, the General Audit Institutions of the Netherlands and Curacao on improving financial management and with the Court of Audit of Belgium and the General Audit Office of Suriname respectively on possible support and cooperation between the Dutch-speaking Audit Institutions. They also consider a joint study. A possible topic could be Brazil’s initiative with INTOSAI Development Initiative (IDI), to conduct a global study on climate change and its consequences.

The XXIV International Congress of General Accounts (INCOSAI 2022) concluded with the adoption by the INTOSAI community of the Rio di Janeiro Declaration. In this declaration, the International Organization of Supreme Audit Institutions (INTOSAI) pledged to continue its work by responding to change and emerging risks and to foster better collaboration with stakeholders to advance the General Audit Institutions and INTOSAI work.

During the official closing of the XXIV INCOSAI Congress, the President of the General Audit Office presented to the Auditor General of SAI Brazil, also the President of INTOSAI and host, a book on the cultural heritage of Aruba. The General Court of Auditors wishes to thank the National Archaeological Museum Aruba and Foundation 1403 for this beautiful gift, which Mr. Bruno Dantas very gratefully received.

World Tourism Day: “Tourism and Jobs — A Better Future for...