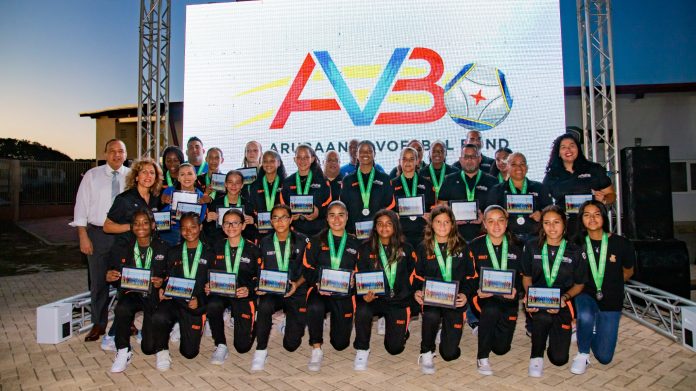 Monday afternoon a celebration took place in honor of the female U15 soccer team who represented Aruba in the 2022 Concacaf Girls Under 15 Championship, in Tampa, Florida and came out as sub-champion. Our reporter caught up with the team’s head coach, Milvienne Henriquez, who told us how the preparation for the team went, and what their experience was during the championship.

Henriquez says that the presentation went sublime. The team is part of a program of AVB (Aruba Football Association) called Academies, and from the academy a selection is made to form the team. These players train the whole year four times per week, the kids have no rest.

Last year, this same team represented Aruba in the Dominican Republic in the CFU Challenge Series championship, where they were crowned winners. Regarding the difference between CFU and Concacaf Girls U15, coach Henriquez explained that CFU is a development competition under Concacaf.

She added that this is the first time this team is competing together, and they wrote history as the first U14 team winning the championship. From there, Henriquez says, the team trained a whole year during which they had friendly games of a higher level of competition, among others, against the Curaçao U17 team. “The preparation was a lot more intense, and the experience they have already, so they are better prepared”, Henriquez said.

Coach Henriquez commented that of the different aspects during the championship in Tampa, the most difficult for the team was the sun, the heat, the lack of wind, and the schedule. The team had two games back-to-back, then a day’s rest, then two more games back-to-back, and then another day’s rest, until they reached the final.

But Henriquez highlights that during their one-year preparation, when they found out the schedule that the Aruba team was playing and the season in which they would travel to the U.S., they began training here on Aruba in the same hours to see if the kids could handle the intensity and so that they would be mentally prepared for the sun as well.

In the beginning, Aruba was in the C-league, the lowest league for the Caribbean islands. Coach Henriquez explains that Concacaf selects these leagues based on the U17 ranking, and Aruba had only participated once in the U17, meaning they were lower. But to their surprise, coach Henriquez says, two days before they travelled, a lot of the small islands were no longer able to participated because of visa issues, among other problems, and thus Aruba was moved to the B-league, with countries like Nicaragua and Honduras, which are big teams.

“What was good is that the kids were well prepared and put up a good fight. It was a challenge, but surely you can see our soccer is on a high level and deservedly we fell into the league in which we belonged from the start. And what is great about this is that many coaches, for example those of Honduras and Nicaragua, didn’t consider Aruba as competition. To their surprise that was not the case, and we received a lot of compliments from them”, Henriquez added.

Regarding what’s next for this team, Henriquez indicated that first they will take a much needed break. The academies continue, the programs of AVB continue and there will be a new U14 team, which will be formed again for CFU. Henriquez mentioned that there will be another U17 competition next year or in two years, which means the kids will continue their preparation and make sure they are in top form, because U17 is ranked and that means it is a stronger competition.

On the subject of soccer, the male U14 team was also present at the celebration, and Erick Santos, technical staff member, announced that this team will depart tomorrow to represent Aruba in the CFU tournament in the Dominican Republic.

“It is a tournament in which we will definitely give our all. There will be four games in one week, where we will play against teams like St. Kitts, Jamaica and Haiti. The preparations have been going on for a long time already and we have no doubts in this team, and we hope to be able to bring this trophy to Aruba and to celebrate with the Aruban community as well”, Santos said.

Moments to cherish forever with friends and family!