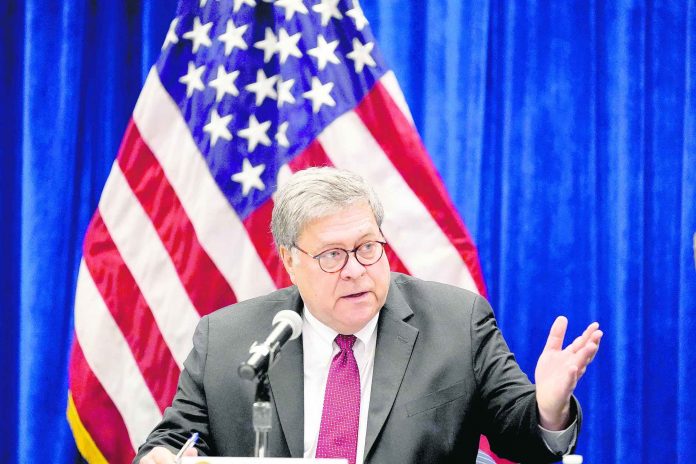 Some military voters are concerned they have been thrust into the center of unsubstantiated fraud claims by President Donald Trump’s campaign that several thousand people may have improperly voted in Nevada.

There is no evidence of widespread fraud in the 2020 election despite Trump’s claims. Election officials from both political parties have stated publicly that the election went well and international observers confirmed there were no serious irregularities that elected Democrat Joe Biden the next president.

Still, lawyers from Trump’s campaign sent a letter to Attorney General William Barr alleging they had uncovered what they described as “criminal voter fraud” in Nevada. They said they had identified 3,062 people who “improperly” cast mail ballots in Clark County, a Democrat-heavy area that includes Las Vegas and about 75% of the state’s population.

Those people were identified by “cross-referencing the names and addresses of voters with the National Change of Address database,” according to the letter.

A copy of the letter provided to The Associated Press included a 62-page chart enumerating each voter but the listing did not include the name, address or party affiliation. Instead, it listed voters by the county, city, state and zip code they moved from, and the city, state and nine-digit zip code they moved to. The full nine-digit zip code can narrow an address down to a particular segment of a few blocks or even one side of a street, according to the U.S. Postal Service.

Voting rights activists say hundreds of people on the list appear to be linked to the U.S. military. The American Civil Liberties Union of Nevada, which is doing election protection work, found 157 voters who listed a military base post office, according to staff attorney Nikki Levy, meaning they likely voted legally under added protections in federal law allowing absentee voting for military members and their families.

It’s hard to know offhand how many military families are on the Trump campaign list because not all service members use their base post office as their address, Levy said.

Rebekah Mattes, a civil servant who now lives in Stuttgart, Germany, said she believes she found herself and her husband, who is in the Air Force, on the list because it includes only two voters who made the same move they did from North Las Vegas to their new zip code in Germany.

“It’s a little disheartening that this process that’s in place for people like my family, to be able to exercise their right to vote, is being questioned,” Mattes said, adding, “That’s a pretty broad brush to be painting with for something that’s this important.”

Her comments were echoed by other military families who had the same concerns. Some cited security worries about having details about their past residences and their new nine-digit zip codes being linked and released.

The Justice Department had been looking into the allegations, but officials wouldn’t comment further. With Biden leading Trump by wide margins in key battleground states, none of those issues would have any impact on the outcome of the election.

Nevada election law stipulates that in order to register to vote, an individual must have been a resident for 30 days preceding an election, but does not specify how long an already registered voter must be physically present in the state in order to participate in an election.

The Nevada Secretary of State’s office said voters do not lose their eligibility to vote or void their registration when they leave the state temporarily, even for long periods of time, and they may travel for 30 days or more and still cast a ballot.

Clark County Registrar of Voters Joe Gloria responded to the Trump campaign’s allegations at a news conference last week, saying his office was reviewing a list of names that the campaign sent him, but said the allegation involves “something that happens regularly.”

Federal and state law allows otherwise eligible voters to be exempt from any requirements that they reside in a state for any amount of time in order to cast a vote in a presidential election. A citizen who moves within 30 days before an election has the right to vote in their new state or their prior state of residence. Voters who take advantage of that only vote for president and vice president. They do not get to vote in any other contests.

Shortly after the Trump campaign sent its letter, Barr gave prosecutors the ability to go around longstanding Justice Department policy that normally would prohibit such overt actions before the election is certified. Soon after it was issued, the department’s top elections crime official announced he would step aside from that position because of the memo.

The issues Trump’s campaign and its allies have pointed to are typical in every election: Problems with signatures, secrecy envelopes and postal marks on mail-in ballots, as well as the potential for a small number of ballots miscast or lost.

Trump’s campaign has also launched legal challenges complaining that their poll watchers were unable to scrutinize the voting process. Many of those challenges have been tossed out by judges; none of the complaints show any evidence that the outcome of the election was impacted.

Another active probe in Pennsylvania, meanwhile, appears to have fallen apart after the employee recanted the allegations in an interview with the postal service’s inspector general’s office, people familiar with the matter said. It is a federal crime to make a materially false statement to a federal agent. The people were not authorized to speak about an ongoing investigation and spoke to the AP on condition of anonymity.

The employee, Richard Hopkins, admitted in an interview with the Postal Service’s inspector general that allegations were based on parts of a conversation he overheard among co-workers at the mail facility where he works in Erie. He also said an affidavit cited by Sen. Lindsey Graham, R-S.C., the chairman of the Senate Judiciary Committee — and forwarded to the Justice Department by Graham — was written by Project Veritas, a conservative group that has been promoting voter fraud accusations on social media.

He agreed that some of the statements in the affidavit should have included amendments or caveats and also agreed to sign a new statement that undercut some of his main claims in the initial affidavit, according to a recording of the interview posted by Project Veritas.

Pelosi: Impeaching Trump ‘just not worth it’