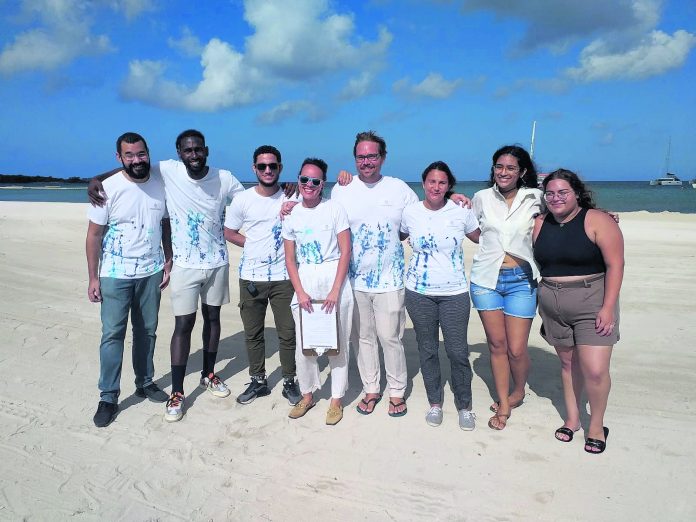 Tuesday morning, Metabolic Foundation announced its Surfside Science project, which will focus on methods for measuring the quality of air and sea water, changes in the coast landscape and vegetation in the bottom of the ocean. During a press conference, Christie Mettes, project coordinator, elaborated on the project and its goals.

Mettes explained that Surfside Science is a project that received financing from Resembid, which is a fund of the European Union managed by Expertise France, the collaboration agency for French development that manages projects in the Overseas Countries and Territories (OCT), which include Aruba and 11 other islands in the Caribbean.

The Surfside Science project will have duration of one year, and during that year, Metabolic Foundation will test different methods that can be used to automate data collection on Aruba’s coasts, both on land and in the ocean itself, close to the coast. Mettes indicated that these methods are more affordable than traditional method, and the foundation tries to make them more applicable in order that they can also be used by people who are not scientists themselves.

To guarantee that the methods are trustworthy, throughout the year the foundation will be working together with marine ecologist and environmental engineer Tatiana Becker, who will compare the results that Metabolic Foundation measures with the results that she will measure using standard methods generally used in science.

With this, the foundation hopes to prove that their methods can be applied on more beaches around Aruba.

Mettes explained that the foundation is in close contact with the Department of Nature and Environment (DNM), and with the University of Aruba, and in the development of this project, the project was confirmed by DNM and Deaci (Department of Economic Affairs, Commerce and Industry) before it was sent to the European Union.

Mettes also said that what worries the Metabolic Foundation is that around the world, and also in the Caribbean, what is happening in the coasts can be observed, particularly with climate change, and regrettably in Aruba a lot of the data which could show these changes is not there. She commented that right now the reason given for this lack of data is that there is no money to finance the data collection, or sometimes not enough capacity to constantly collect the data.

With this in mind, Metabolic Foundation is trying to come up with solutions that automate the collection of data necessary to observe the changes that are going on. When Aruba wants to implement a solution, if there has been monitoring, it is possible to see if the solution is working or not.

“A lot of data collection at this moment is not automated and it’s not constant. We took note of a report by Carmabi which for sure was very valuable for Aruba, but it is a snapshot and they didn’t continue collecting constantly. What we want to contribute with is a system that when for example you go online to find information, this information can be available”, Mettes said.

She indicated that a lot of this data is data that Aruba needs to present for the Sustainable Development Goals, thus is data that internationally can be requested and for which there is already a purpose and policy. Metabolic Foundation will not work on the policy.

Mettes added that in general there are changes in the Caribbean, but there is still a lot of information lacking, on other islands as well, and a lot of them don’t have a monitoring system either.

Regarding the goal of the Surfside Science projects, Mettes commented that with the study they can prove who is responsible for what. What they can say is that once they have the data they can see if there are changes taking place, or if the quality is bad. A lot of the points measured by the foundation are the basic lines, the simplest things. They see the water temperature, acidity (pH) of the water, water conductivity, salinity and the amount of oxygen that exists in the water.

The problems of pollution or waste are outside of the scope of what they’re measuring, but are related to this. When these points begin to go down, at that point it can be investigated why they are showing a negative direction.

“Right now, the goal of this study is to see if these methods can be used. We are using the area of Surfside as a pilot area, and if the investigation shows that the methods work, then we hope to expand the project to monitor all coasts of Aruba”, Mettes added.

The community can also contribute with the Surfside Science project. Mettes commented that they want to make the project very open, and there will be various information sessions and also aspects in which the public can collaborate, for example, by taking pictures underwater.

Finally, in the name of Metabolic Foundation, Mettes extended an invitation to the people of Aruba to follow them on Instagram and be pending for updates on the project.

“We will try to share information every month on the progress of the project, how it’s going and what kind of data we collected already, if it was validated or not. Any person who wants to participate or has feedback, we are very open to receiving the feedback”, she said.

The government is addressing the ATV/UTV issue