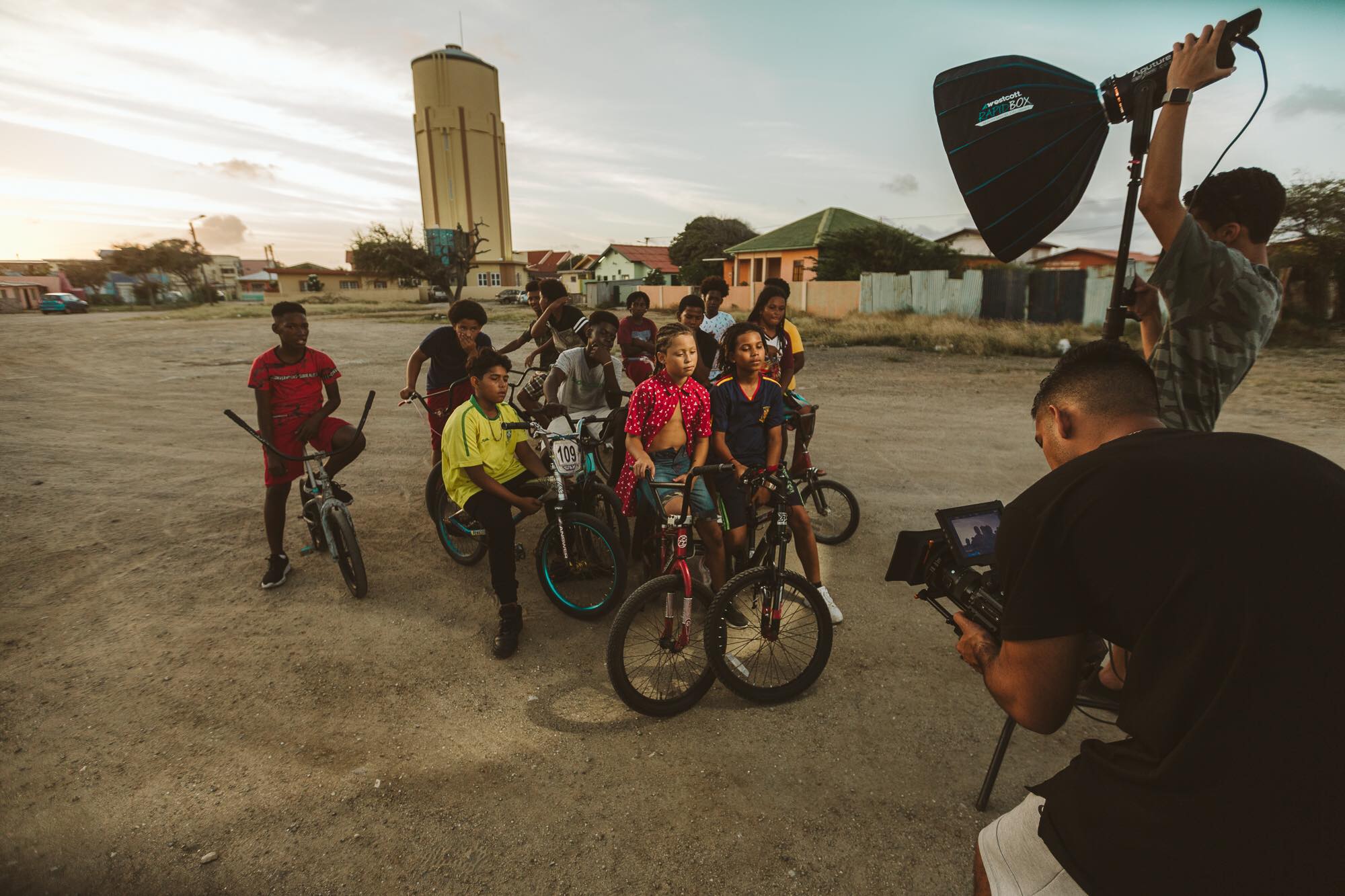 “Take the challenge and be part of something great”

Maastricht – Following the Creative Islander’s Artist Edition Series, today we are highlighting yet another dynamic industry within the Cultural & Creative Industries (CCIs), namely the Film & Production Industry. The film industry is a comprehensive industry that is devoted to creativity. The film industry comprises the technological and commercial institutions of filmmaking. All the way from The Netherlands, meet Mario Gonsalves, an upcoming film producer who has taken Aruba’s name many places around the world through his love for film making and video production. On his road to his graduation, Mario is embarking a new project called Patroon as his final assignment and is seeking financial aid in assisting him fund the costs. Read up all about Mario and how you can contribute and be part of history.

Mario Gonsalves is 26 years old and currently a senior student at the Hogeschool voor de Kunsten Utrecht (HKU) in The Netherlands. As a young man growing up in Aruba, Mario always wanted to become a pilot, but could not afford that at that time, so he fell back on one of his hobbies, which was painting. He started exploring more into graphic design and he learned more on animation and then 8 years ago he made his debut in film making. In 2011 Mario started his own YouTube show and gained attention from various art institutions in Aruba. These art institutions gave Mario a funding to further expand his knowledge on filmmaking as the island of Aruba didn’t have any educational programs focusing on film at the time. With this, Mario received scholarships to go to the United States of America to study cinematography in Maine, and ‘introduction to filmmaking’ and ‘music video production & business’ in Los Angeles. After that experience Mario changed direction and headed to Europe, where he is now studying at HKU, in one of the biggest student cities of The Netherlands, Utrecht. During his journey, here in The Netherlands, Mario received a lot of ground breaking opportunities with many artists and record labels. Next to attending classes at HKU, he also travels. Mario has not only made a name for himself, but has represented Aruba in many places around the world, and has even brought many artists to the island. Two years ago, Mario was the tour manager of DJ Chuckie and traveled entire Europe. Mario also directed a music video for the international artist Rehab featuring Sofia Carson called Rumors together with Disney Records, reaching over 16 million views on YouTube. He has worked in Paris with famous models, and other projects like; the Vampire Diaries, Pretty Little Liars and so much more. Last year Mario and a friend (also Aruban) started a new business called Recent. Recent is a film and production company and offer services to brands and artists on the international film industry market.

According to Mario, film is the art form where he feels comfortable. He enjoys the fact that it is a powerful art tool. A photo can say and mean many things, but a film you can say in literal terms what you want to say. This level of freedom, Mario can use this mechanism to transfer information to the public in a very artistic and creative, yet sensible manner. He can touch on certain topics of debate, that could help educate people, instead of just entertaining. Through film, Mario can work with international collaborators and have impact on many people from different backgrounds. Ultimately, Mario feels like in this digital era, he can influence and communicate with people through his art, which is truly a beautiful and humbling talent.

Growing up in Aruba Mario never imagined what challenges he would encounter as he takes his journey abroad. One this he mentioned is the language barrier he experienced once he left the island. “We are known to speak four languages, but in reality, we can’t dominate one perfectly”. When he came to The Netherlands, he only spoke English, and took a lot of him to study the Dutch art culture. Now, he can use his voice to influence the art scene in The Netherlands. It took Mario 2 years to get into HKU, so that provided a lot of character building through self-discipline and patience. Mario is thankful for his upbringing, and recognizing how having respect for other has brought him far in life. Besides that, coming from the Caribbean, Mario has an advantage of providing new flavors and new art perspectives to his surroundings. His inspiration comes from everything he has gone through in life, which he now creates artistic content with.

I asked Mario on his opinion on art development on Aruba, and how he thinks Aruba could thrive in a CCI. Mario expressed that he personally feels that Aruba is centuries behind in art. Even though art is continuously exposed to the public, people don’t seem to value it as much as it could be. But, this is all because of education, or lack thereof. We should start appreciating local artists so international artists could also fuse within. Mario admits that when he was a child he was not inclined to art, and could recognize that side within his own experience. He admits that maybe this could be the reason why so little students chose art as their career and is thankful that he received the support he needed from family and friends. The perception that art does not produce economic value, is totally wrong and people should be open to this endeavor.

Now, as a senior at HKU, Mario has to make a movie as a final graduation assignment. To realize this project, he has to invest in this as well. This movie serves as a personal representation of who Mario is and where he comes from. The film is about a boy that grows up with his father in the slums of Amsterdam, specifically in the city of Bijlmer. This neighborhood is known for having many immigrants living there and Mario has the intention of portraying how a young man without a father grows up amongst these types of challenges. Generally, people that grow up in these neighborhoods endure many social problems and receive a lot of prejudice from society. What Mario wants to showcase is the inner layers of what it means to grow up in this type of environment.

To be able to complete this project Mario would have to raise 14.500 euros and has chosen to do this through crowdfunding, meaning everyone can contribute to this remarkable project, even you! Many people have already expressed their support and feel they can relate to the plot of the story. Mario is very pleased with this, because that was his initial intention. To create awareness and to educate society about diversity, inclusion, respect and namely what it means to grow up in a troubled community, where you are expected to fail, instead of rising above and succeeding. Up to this point in the interview, Mario has raised around 5.650 euros and needs help from the entire Aruban community, art lovers and film enthusiasts.

Mario hopes to inspire other young artists on Aruba to believe in their talent and to believe in their future. If you are an artist and want to pursue a career in one of the many industries in the CCI, go for it. Mario was adamant on one fact, which is to do it for the right reason. This film project is also a debut for Mario, because once he graduates, the dream is to expand his production company and collaborate with many more artists around the world. His outlook for the future consists of making more films, and impacting more people along the way, while doing what he loves and what he feels is what he was meant to do with his life.

Creative Islander wishes Mario all the best in his graduation project and film career. What a great inspiration to all of us, on what it means to not only follow your dreams, but to decide to use your gift to impact lives of people. Creative Islander encourages everyone to donate to this amazing project. To do so, please visit: bit.ly/patroonfilm to donate! Don’t just donate, but be part of something great.

Biography – Currently, Thaïs Franken is a 23-year-old Aruban student at the University of Maastricht (UM). She is studying a Master of Science in Public Policy and Human Development in collaboration with the Unites Nations University (UNU). Back home, on the beautiful island of Aruba she completed her Bachelor of Arts in Organization, Governance & Management (OGM) at the University of Aruba (UA). She successfully graduated and defended her thesis titled “Placing Culture and Creativity at the Heart of the Aruban Sustainable Development” on July 6th 2018. Thaïs is very passionate about topics such as sustainability, innovation, culture and creativity. Next to her academic interests, she enjoys reading, writing, dancing and cooking.

Choose what you Love to Study