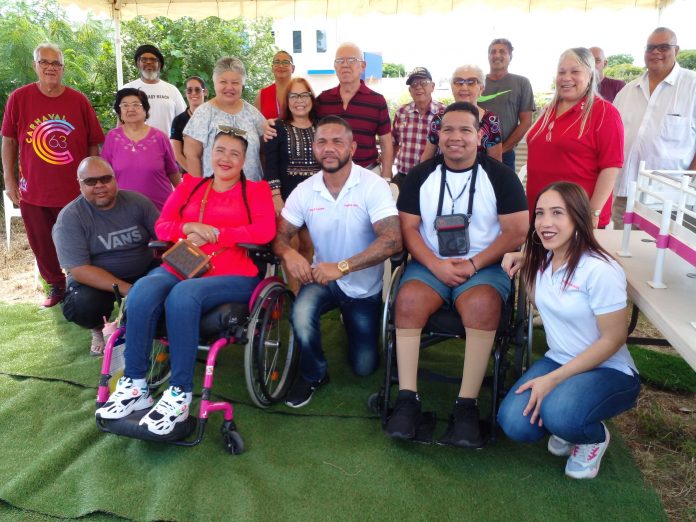 This week during a press conference, Terrance Ras of the Leap of Faith Foundation presented a prototype for his project Leap of Faith, which consists of a pier for people with disabilities to go into the sea and receive therapy to help them heal – and in some cases, recover their ability to walk.

“I want to tell people that I delivered. I promised that we would start the project, and today I am presenting it to you. My wish is for people with disabilities to experience what I have experienced. I can walk again after going in the water constantly”, Ras said.

Ras, based on his own personal experience, emphasized that when the water goes above the stomach area, it gives peace of mind and removes the fear to take those first steps again. “And that is the beginning.”

He explained that the pier comes with eight pieces of equipment that can be connected to the pier to do different types of exercise. This way, therapists who want to make use of the pier for therapy can help their clients with therapy in the water.

In the beginning, Ras came up with the idea for this project under the belief that in Aruba there are less than 100 wheelchair users, however, after research, he found out that there are more than four thousand wheelchair users in Aruba, all with some type of disability.

He explained that the pier has its own management team and he has the plans for functioning already. The pier works in a way that it can be completely dismantled and carried easily to place it in the water. The pier presented was specifically made to be placed in the sea at Baby Beach.

Ras said that the pier is not only for locals to use, but also to create a boost for Aruba as well, because Aruba will be the first place in the region to offer something for people with limitations to receive the therapy they need to maybe walk again. “I am proof of this myself”, he emphasized.

His idea is to make the pier available every day, and weekly it is taken out of the water once for cleaning, after which it would be placed back in the sea. He highlighted that this doesn’t cause any damage to the environment, since it’s just about pulling out, rinsing, and putting it back in.

However, Ras indicated that the permit from the Department of Public Works (DIP) is still pending.

Leap of Faith’s main goal is to install piers in different areas. “This specific pier is made with the measures for Baby Beach, but when I go to another beach I can do the research again and make a pier for that beach”, he added.

He finalized saying that by the beginning of next year the pier will be ready to enter the water. It is made from aluminum and not iron, so it will not oxidize, doesn’t need to be painted, and it is light enough to be carried into the water.

January 27, 2023
For today we received a lovely message from Tomas, Eliana, Agustin and Catalina Hartmann Hansen from Argentina.

Filling school backpacks with many hands