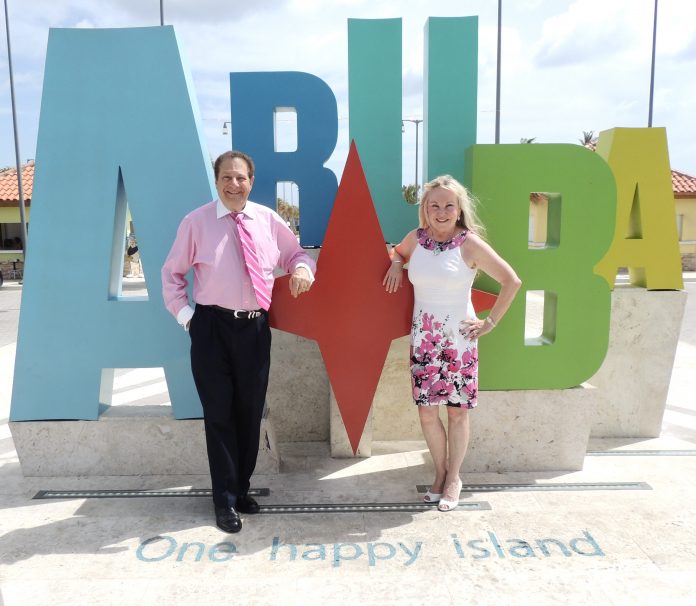 It was 20 years ago today; Saturday, December 7, 2002, when the Government of Aruba paid tribute to Dick and Deborah Miller at a sumptuous luncheon hosted by the Radisson Aruba Beach Resort & Casino (now the Hilton Aruba Caribbean Resort & Casino).

More than 200 ACE travel agent delegates and well-wishers, along with Aruba Tourism Authority representatives from Aruba and the United States filled the ballroom as then Minister of Tourism and Transportation, Edison Briesen, along with Marcial (Charly) Ibarra, Director of North America for the Aruba Tourism Authority presented Dick and Deborah Miller with the prestigious first Official Ambassador title to be given by the Island Government of Aruba.

The Award was created for Dick Miller for his boundless energy in promoting Aruba tourism here on the island and around the World. Dick Miller hosted “The Dick Miller Show Aruba” on the radio 7 nights-a-week for 18 years. Known worldwide as the Tourism Man in the Caribbean, Dick Miller takes his honorary lifetime Ambassadorship seriously, continuing to promote Aruba wherever he travels.

The people of Aruba continue to be a part of his extended family. Today, Dick Miller is a Team Leader at five (5) RE/MAX offices in the greater Sarasota / Venice, Florida area. He and his wife, Deborah, who was also named as Ambassador are the number one real estate Platinum Team at RE/MAX Platinum Realty’s five offices.

Dick and Deborah wish to thank the Aruba Government and the people of Aruba for always welcoming them back to the island as part of the Aruba family.

From fashion to music to a magical Aruban reality