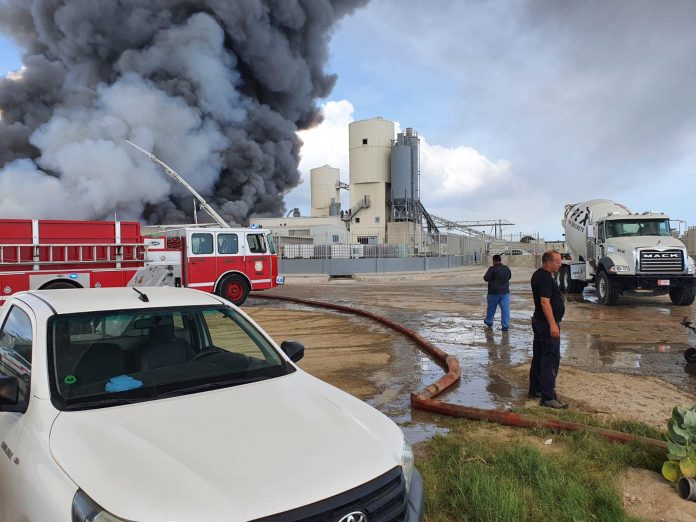 Today in the morning, the sky in Aruba was consumed by black smoke coming from the south. It was recycling center Daltra’s waste sector which caught fire.

Right away, police and fire department units were dispatched to the area. Police closed off the road to avoid people from coming close to the smoke.

Neighborhood police from Santa Cruz was also present, and the police’s spokesperson. Personnel from the department of calamity were also present to familiarize themselves with the situation.

By 3p.m. the fire was still ongoing. Our reporter got in touch with Arugas, the gas company which is near the recycling center. They said that although the fire was still a safe distance away, they had evacuated the premises.
The fire department said that they were fighting the fire close to the gas plant, but emphasized that they had no control on the smoke yet.

Later, the Department of Public Works, DOW informed that they had sent big sea pumps, because the water pressure from the water system was not enough to control the fire. DOW also sent personnel to help, with additional diesel pump and hoses.

Everyone who lives and works in the area was ordered to evacuate.

Around 5:30p.m., minister of Justice and Social Affairs posted on his social media a message: “Today our entire community noticed a lot of black smoke in the area of Barcadera. Authorities can confirm that it was the company Daltra N.V.
Right away, various unites of the Fire Department were mobilized to deal with it. It is an alarming situation that puts our firemen in danger. The Ministry of Justice and Social Affairs sends words of strength primarily to our Fire Department who is working with body and soul to overcome this problem, also to DOW and others who are supporting our Fire Department in order to end the fire as soon as possible.”

At that time, smoke was still coming out of the area, and our reporters understood that while the fire had subsided, it was still not completely out. The fire department said that the fire was under control but they would continue monitoring the area through the night.