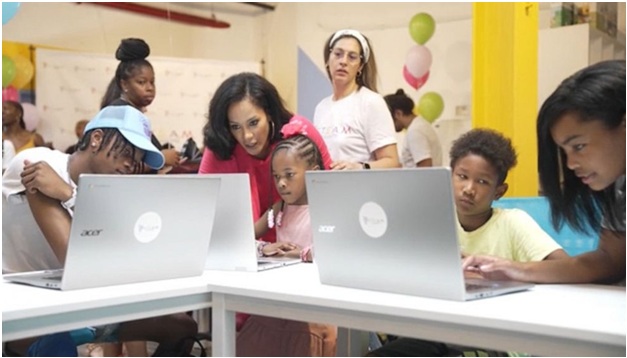 “There is potential in Aruba to provide call service and also in the field of information, particularly because the country is multilingual.” That is the opinion of Niesha Butler. Butler, native of New York, is a former professional basketball player with the WNBA, and an actress; and she knows what she’s talking about.

She has a special connection with Aruba. Her mother Alice was born in New York from an Arubian mother, and lived a long part of her life with her grandparents in Aruba. And like her mother, Niesha, who was born in Brooklyn, New York, spent a lot of time in Aruba with her grandmother Carmen and her great-grandparents, Joahn and Alice Breetveld.

Alice, Niesha’s mother, who passed away some years ago, grew up in New York and Aruba, and her family was well-known particularly in San Nicolas. Her grandparents were the owners of the famous Dutch Machine Shop on Congoweg. Niesha grew up listening to stories about an Aruban landmark, and perhaps this pushed Niesha also to decide to study programming, and now she is a software engineer.

Butler earned her degree as Software Engineer after a successful career in basketball, a sport that gave her an opportunity to stand out. Niesha even was part of the New York City All City Team for four years in a row. She is still considered one of the top basketball players at the high school level.

After a year with New York Liberty, she played at the professional level in Gran Canaria, Spain, and the famous basketball athlete, Stephon Marbury approached her to attend Georgia Tech. This is how Niesha became the first female athlete at the University to win the title of Rookie of the Year. She appeared in the Spike Lee movie, ‘She Hate Me’, and starred in the movie ‘Bringing Rain’ by Noah Buschel, as well as appearing in the first advertisement that Lebron James made for Nike, among other things.

But the blood of an entrepreneur is in her. As a child she made money selling T-shirts, as adult she worked in the corporate sector of Petroleum and Natural Gas, and started her first company based on information technology, Sports DataBase Network in 2010. And during her career as an IT professional, Niesha decided to start a non-profit organization, Ballin Technologies, to provide youngsters in marginal neighborhoods in New York the opportunity to learn the world of coding to have better perspectives for their future.

What’s more, on the day she spoke with our reporter, Niesha had just finished a Saturday session. “Kids. Logic. The first week they registered but did not show up, and today, they did not register but did show up.”
Consequently, she had to prepare her staff on how to deal with the unexpected. “But on the other hand, they receive the preparation on how to deal with children who cannot sit still, cannot focus, are too excited or are too loud. We also learn with the process.”

Niesha doesn’t have any children of her own and she doesn’t have teaching experience, but in her job as a volunteer, visiting schools, she realized how particularly girls would show interest in programming and other STEM (Science, Technology, Engineering, Mathematics) subjects. Niesha decided to provide the program STEAM Champs, with Art in the curriculum.

“I wanted to make opportunities available for them, but I was nervous because I don’t have experience in education. But what I realized is that children, what you need to do is to see them. Let them notice that they have your attention and interest in them. In that moment, they do their best to fulfill expectations.”

STEAM Champs got a lot of attention in the United States, and in an interview with ABC News, Butler explained that she works with interns who also had the opportunity to learn coding for the first time. “People sell basketball dreams in our community. I think it’s very important to sell these technical dreams”, Butler said.

She elaborated to our reporter: “The percentage of people who live below the poverty line in New York is quite large. I was shocked. At the same time there are thousands of jobs in technology, particularly in coding, that can’t be filled. These are jobs that pay big salaries.”

In other words, there are opportunities, but until now a lot of people of color in New York did not have the possibility to use this trajectory. Access to a computer and stable wi-fi to start is absent in a lot of these homes. This is one of the necessary conditions to give young people the space to grow in this subject.

Butler’s STEAM Champs has computer and continuous wi-fi, so the kids attending the camp can be sure that they have a safe place where they can work on their future. Data shows that young persons who participate in such programs have more probability of completing higher education.

And Butler thinks the children of Aruba should have the same opportunity. More importantly, the fact that in Aruba various languages are spoken makes the island ideal to work on this potential, according to Butler.
But while she is working to provide the kids in New York with the necessary tools to grow in the tech world, Aruba remains as the place she visits to feel closer to her mother. “I realized that since she passed away, Aruba has been calling me. It is an emotional connection to my mother, and soon I will be back on Aruba”, Niesha said.

Time doesn’t stay in a bottle