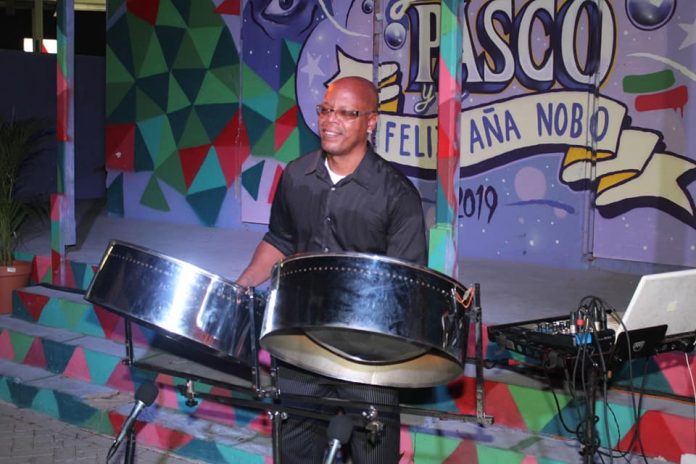 The third edition of Honor to Connor Steelband Celebration is planned for Sunday, August 18th at Paseo Herencia Mall. Keep this date reserved for a spectacular event where steelband legend Mr. Edgar Connor is honored for his pioneer work in music. This is a celebration of Aruba’s music and artists.

The Paseo Herencia Mall has given tribute to father Connor in their Amphitheatre in 2007 and in 2017 this happened again in their Walk of Stars. The mall put the names of all the local stellar athletes, artists and entertainers in a spot to be admired by thousands of visitors and by the local community in general, being a role model for all. The team of Sweet Pan Music consist of Nico Connor and Lee Connor, sons of the legend. Paula Engelen and Zaira Orman from the mall and Tico Kock and Ronwayne Kock from Touch of Steel participate too. Steelpan music has a rich history and Connor’s sons cherish the value of this typical music by continuing their father’s legacy. Quiver Quips Steel Orchestra, The Aruba Invaders Steel Orchestra 2nd y 3rd generation, N.L.G. Dancers accompanying Nico Connor, Wesley Connor standing by his father Lee Connor and Carnaruba with their majestic costumes complete the event presentation. Four persons that dedicated to the steelpan music of Aruba are being honored, who they are will be kept a secret until the event night.

Steelpan Story
Connor’s sons are professional steel pan players these days and learnt it all from their father who was one of the pioneering steelpan players on the island. Steelpans (also known as steel drums or pans, and sometimes, collectively with other musicians, as a steel band or orchestra) is a musical instrument originating from Trinidad and Tobago. Steel pan musicians are called pannists. Steelpans are built using sheet metal with a thickness between 0.8 and 1.5 mm (1⁄32 and 1⁄16 in). Historically, steelpans have been built from used oil barrels, just like James Edgar Connor did. q

The Casino at the Ritz-Carlton, Aruba to reopen as Aruba’s premier...