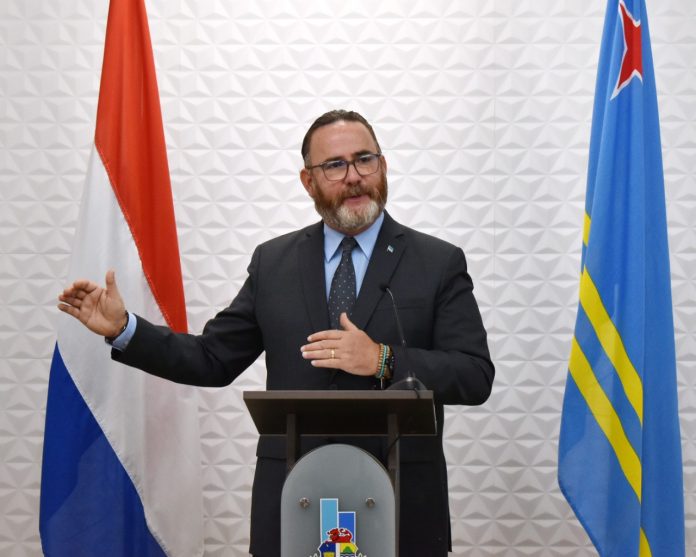 Recently, water production company WEB informed the community of Aruba through a press release that the water rate would increase. Regarding this development, minister of Energy, Glenbert Croes informed during a recent press conference that this decision was rejected by the government.

The government, as shareholder in the Utilities company, and Utilities as shareholder of WEB, had to suspend the decision and announcement made, taking into consideration that the cost of living is already too high, and water and electricity are basic needs.

Minister Croes explained that for 7 long months (since the last hedging finished) they asked WEB and (electricity company) Elmar for them to absorb the increase in price – mainly the result of the increase in price of oil worldwide. At the same time it is understood that currently they are in a very difficult situation and cannot keep absorbing the increase anymore. The question now remains if the price of water and electricity will go up, how and in which way this will be done.

“At the end of the 90’s, I was myself the minister in charge of Utilities and back then we came up with the rate structure that is in place until today. The structure means that someone who uses a small amount of water pays less, because they use less. Thus the structure rewards those who use water in a conscious way”, Croes explained.

Precarious situation at WEB and Elmar

Currently the government is aware and understands the precarious situation of WEB and Elmar, and thus understands that the rates must go up. But this has to come in a way that those who have ‘wide shoulders’ – meaning, more means – will have to pay more, and must have consideration of the group who doesn’t.

Regarding the rate structure, must also take into consideration situations where for example, some families went to live together because of necessity. In this case, if you only look at the amount consumed, this could give the impression that a family can pay more, but in reality, it is because of necessity that they live together and cannot survive on their own. Croes explained that taking this type of situations into consideration, the Department of Social Affairs (DAS) must be involved – and so a dialogue was held with the minister in charge of that department, Rocco Tjon. This way, it is possible to avoid that cases like the above mentioned fall into a rate structure without taking their social situation into consideration. DAS will have to do an ‘intake’, verify and confirm the social situation, and then refer these cases to WEB and Elmar so they can fall into a socially fair category in the rate structure.

Minister Croes confirmed that the Ministry of Energy, Ministry of Economy, together with Utilities, WEB, Elmar and other departments are working together to figure out how they can translate the price increase that must be introduced into a fairer way.

In his conclusion, minister Croes said that he has hope that the experts will have completed this task by next week and will make an announcement. He recognizes that he cannot put the future of our state companies WEB, Elmar and Utilities in danger, and thus the emphasis remains on the way in which the rate increase will be introduced – so that it will be socially fair. “It is a decision no one wants to make, but this decision must be made in the general interest, which includes the interest of the companies as well”, Croes said.

Happy New Year from Aruba to….