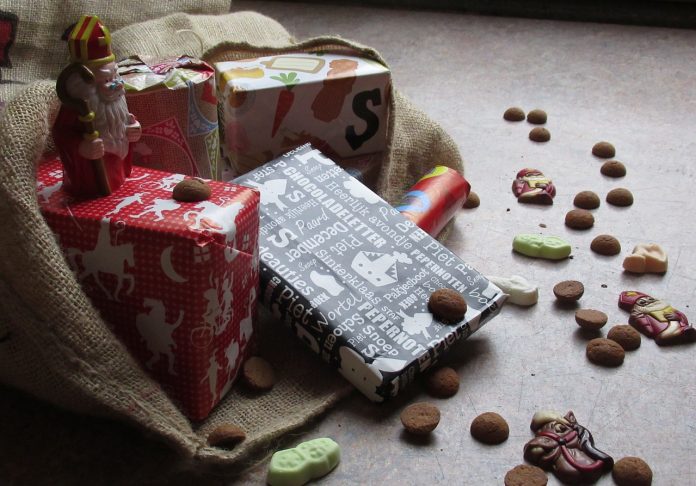 On December 5th, Dutch people celebrate Sinterklaas, a festivity where children receive sweets and small toys if they leave their shoes out with grass for Sinterklaas’ white horse.

Before that, Sinterklaas arrives in Aruba and with his “Piets”, and this year, they arrived on the 13th of November.

Sinterklaas is represented by a man dressed in red attire with white hair and a white beard, he is representing Saint Nicolas, a bishop from the 4th century who lived in what is now Turkey. From the 11th century, the stories about his miracles became known in Western Europe, and he became a patron saint for children.

The feast of Sinterklaas has been celebrated for at least 700 years in the Netherlands. The story of his companions, Zwarte Piet – “Black Pete” – came from a book by Jan Schenkman written in 1850, but the commercialization of the day began in the 1930s. Traditionally, children received the present in their shoe on the 6th of December, the official day of Saint Nicholas in the Catholic calendar, but the celebration gradually shifted to the 5th of December, known as “pakjesavond”.

Sinterklaas vs. Santa Claus
It is said that Sinterklaas was the precursor of Santa Claus. Historians believe that Dutch and German settlers took the tradition with them to America. There, his Catholic garb was gradually transformed into the jolly non-sectarian red suit with the white fur trim we are all so familiar with. Additionally, his lithe frame gave way to a well-padded potbelly, and his trusty white steed was traded in for a troupe of reindeer. Either way, both Sinterklaas and Santa Claus stand for the generosity of spirit and kindness to children.

Sinterklaas will be arriving in Aruba on the 13th of November, although his Piets look a little different nowadays.

President of the Commission for the Celebration of National Holidays, Lyonel Dirks explained that for two years, the arrival of Sinterklaas was not an event for children to attend because of the Covid-19 pandemic.

This year, Sinterklaas will arrive at 10am at Aruba Ports Authority, from where he will board Harbour Arena, and continue with a parade as became customary the last few years.

Dirks said that this year the parade will be a little shorter, as requested by the groups that have been participating for many years, and so the parade will end at Plaza Padu.

Sinterklaas is assisted by many mischievous helpers with that traditionally wore black faces and colorful Moorish dresses. These companions are called Zwarte Piet (“Black Pete”). Zwarte Piet first appeared in print as the nameless servant of Saint Nicholas in Sint-Nikolaas en zijn knecht (“St. Nicholas and His Servant/Apprentice”), published in 1850 by Amsterdam schoolteacher Jan Schenkman; however, the tradition appears to date back at least as far as the early 19th Century.

Zwarte Piet’s colorful dress is based on 16th-century noble attire, with a ruff (lace collar) and a feathered cap. He is typically depicted carrying a bag which contains candy for the children. The Zwarte Pieten toss their candy around, a tradition supposedly originating in the story of Saint Nicholas saving three young girls from prostitution by tossing golden coins through their window at night to pay their dowries.

Something that was previously announced is that this year the Piets will be colorful instead of black. Edselyn Figaroa also prepared a book that will be published soon, called Piet Academy, which will tell the story or why the Piets will have colorful faces this year.

Minister of Culture and Finance, Xiomara Maduro explained that there was controversy regarding the color of the Piets. This is a Dutch tradition, but some people consider that it includes discrimination with Zwarte Piet painting their entire face black, with big lips and gold rings – to many, this represents slavery and discrimination.

“The movement came not only from the Netherlands but also the world and the United Nations. In Aruba we know also that children from a young age are teased by being called Zwarte Piet, and they feel discriminated against. This is why, seeing everything that is going on, two years ago we decided that the arrival of Sinterklaas, which receives public funding, cannot be something that brings discrimination. This is why we decided to come up with colorful Piets”, Maduro pointed out.

Pakjesavond
According to sinterklaas-feestdag.nl, Pakjesavond – or, night of little gifts – is climax of the celebration of the feast of Sinterklaas. On this night, children receive the most gifts. Pakjesavond is celebrated with family or friends, with people singing special Sinterklaas carols.

On this night, Sinterklaas and his Petes come by with a sack full of gifts. Mostly they place this sack by the front door or by a window, knock on the window or ring the doorbell, and run away quickly. Very rarely they do a personal visit to a child and answer all their questions.

Pakjesavond became a popular celebration after the Second World War, that is with a sack full of gifts that are distributed on that night. Before this time, children would simply put their shoes outside and received their small gifts in the morning. The whole family did get together on pakjesavond to celebrate the climax of the feast of Sinterklaas together.

After the war, wealth became available and Sinterklaas was able to give more gifts to all children. Increasingly, people give each other more gifts with poems and little surprises, anonymously to maintain an atmosphere of secrecy.

Representatives of the government of Aruba sign condolence register for Queen...