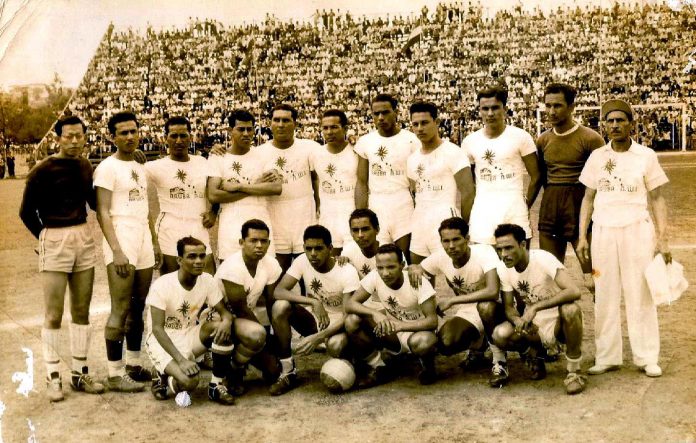 Etnia Nativa is simply native Aruba’s heritage at its best, inviting readers to discover our ancient island through native keepers of the land.

Soon another Soccer World Cup will be held and the perfect opportunity to remember Aruba`s rich history of Football as it is called locally, great teams and legendary players since the days of the First World Cup.

It was in 1920 and during the Olympic Games that FIFA brought together the greatest fans of the popular sport and designated Uruguay, Italy, Hungary, Holland, Spain and Sweden as the possible host for the first Soccer World Cup. European countries withdrew their candidacy in favor of Italy, but the US-sponsored Uruguayans won the nomination. This caused a discontent and Europe withdrew from the first Soccer World Cup.

Behind choosing a South American country as the venue for the tournament was the purpose of moving the focus of attention away from Europe, since the old continent was in the midst of an economic crisis, due to the First World War. This was the reason why FIFA imposed the obligation of a background contest to the participating countries “knowingly” that Uruguay would emerge victorious because it had a good sporting participation and a couple of gold medals from previous Olympics games. This situation was considered an excellent opportunity to attract the world’s attention to South America, the news spread quickly on the radio, meanwhile in Aruba, as in the rest of the world; the interest in the popular sport grew.

It was in 1933 when a group of young Arubans organized by Emirto Reinhardt founded a soccer club and through documents we discovered that the founders called it: Aruba Best Club -in short- ABC the following year, as interest grew, it was founded officially as the ABC association and José Carmelo Croes was named president.

Going back to our team: RCA grew stronger and triumphing in the Pan Caribbean region. So the games began in Aruba as well as abroad. Great players, excellent scorers like the unforgettable master blaster Chas “cannon ball” Loefstok and many beautiful stories. They were all dedicated team members, starting training hours before sunrise.

One of the things I remember most from my childhood is the sound of my father’s sport boots walking on the smooth floor through our house whether he was leaving or returning from the club.

Remembering this story of how they lived through an unexpected adventure as a team. It must have been in the 50’s during a trip to Guatemala. These were politically complicated years in the Central American country. The team left on a flight from Aruba to Guatemala City and had great expectations of the game they were about to play, without knowing that they were going to experience an almost tragic adventure.

Over mid-flight, so minutes to go before landing they heard a loud sound, black smoke was coming out an engine and caught fire. The plane was now losing altitude and did not take long before the pilot decided to make a dive in to an emergency landing. Now choosing where to land was not an easy task in a thick forest. At least it was day tame, the surrounding trees flashed passed the ships wings. Smoke and fire got worst. Finally there was a clearing in the dense jungle, an airstrip somewhere around or near the capital city of Guatemala. Now the pilot did a great job, landing the plane with success. “We made it “the captain announced and everyone was grateful for shaking off the tension since no one was hurt! The joy was immense, but hours later the nightmare began.

What they thought was a rescue operation, turned in to their arrest, our RCA “champions” were arrested as suspects in the assassination of the president of the country that occurred days before. However once the authorities got the correct information that it was a football team from Aruba and not hitmen, they regained their freedom and continued their journey to play the long-awaited game! Our team played 5 matches in total winning 2, tie 2 and loosing 1.During that 1950, RCA played 35 matches won 24 tied 6 and Lost 4.

In 2024 on 15th of February RCA will celebrates its 90th year it has been started.

History cultural and heritage, be part of this exclusive visit to a cozy museum dwelling and experience authentic aruba. Etnia Nativa is a private residential harbouring collections of native art, archaeological artifacts and historic furniture, while the facility it self is the result of transforming wast in to usefull materials.

Meet Anthony Croes a native artist and our columnist at his home! Experience Aruba outside of the turistic grid. Reservations through Whatsapp + 297 592 2702- or mail: etnianativa03@gmail.com