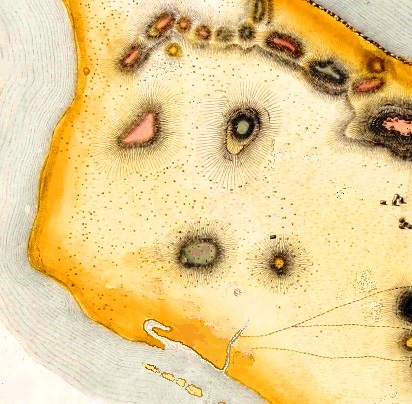 Playa, was and still is how everyone referred to the area of Horses bay. The beach at the salt lake and the fresh water well close to the village, they all are gone today.

Since the Spaniards anchored here, five centuries ago, it was thought to be a safe harbor for unloading livestock. Horses swam ashore to be herded by the Indians who had a special way with horses. The method was to have someone stand on the beach holding a horse on a leash, while other riders were ready to indicate the incoming herds where to swim to. This spot was known as Taratata, by the Caquetios. However they claimed it meant “place of arrival” told by the old ones, the Paleo ancestors, who lived here way before us. They had an encampment at both sides of the entrance of a narrow lagoon. At that time it was all covered with vegetation. This same lagoon went way in land reaching a zone called Tarabana. At Playa on a good day, you could find canoes, piraguas and Cayucos on the beach. Boats of various sizes dug out from tree trucks and all fantastically decorated.

The layback life changed abruptly when gold was found by a Dutch mestizo sheep herder called Willem Rasmijn. Trade activities exploded, like a rocket though the sky. This even made the commanders consider moving office from Commanders bay to Horses bay. Merchants and gold smiths of Curacao soon settled at the foot hill on the path going to the town of Noord. Now the story of Aruban gold reached the ears of freebooters, pirates and buccaneers. Strange ships could be seen at the horizon. You did not really needed to be a corsair; anyone who wanted to get some of it could do so for their own. Now, something had to be done to maintain peace and order under the citizens

Pic. 2. Sketch by A.F. Lancker full battery of the fort

Governor Johan Rudolf Lauffer (1796-1803), a Swiss by birth, had the idea that a fort was very necessary and had some designs presented. Rather against war fleets of European armed forces, forts in overseas areas should withstand any privateer incursion. The fort was constructed and four pieces of artillery were mounted there in 1797. From that time the number of people coming to live on the bay itself constantly increased. This was the reason why Commander Borchard Specht (from 1792) or his grandson Pieter Specht (from 1803) shifted the seat of authority. When Commanders’ Bay was deserted and the people settled on the Ponton hill, the administrations also moved there. Now that it had become safer to live on the bay and a new dwelling-Centre was arising around it and the commander established his headquarters there too.

Oral tradition says that Commander Bruin Govertsz Quant (1805-6) still resided at Ponton. A removal after Quant would be plausible. Quant’s house was razed to the ground by the English. In fact, until the coming of Boye in 1816, our information about the commanders is very confusing indeed. It does not seem to be known where Boye lived, but about Jan van der Biest III, who superseded him, in the capacity of vice-commander in 1819, tradition reports that he used to live at a place where now Windstraat runs. In Van der Biest’s time there still was “mondi” (An Aruban word denoting barren soil over-grown with weeds and cactuses). The story tells us that the old kwihi-tree- it has survived till the present day- was already standing there at that time. People now belonging to the oldest generation relate that they heard that under this kwihi-tree Van der Biest used to play his violin in the evening, seated before his country-house. A delightful scene from Aruba’s age of repose: The commander in his garden, playing his violin to his family, in the background some slaves serving (uncooled) refreshments. A peacefulness only slightly disturbed by an occasional visitor who, on horseback, or straddling a donkey, comes to pay his respects to the commander and his family. We have anticipated events here in order to be able to give a continuous survey of the removals of the commander’s residence. Together with this functionary an increasing number of persons settled “on the Bay”, as it was then commonly called. The construction of the Fort had made life reasonably safe there, though his safety will prove anything but absolute in the period to be discussed in the next episode. Discover an Aruba which no other could share with you. Discover and explore and take your experience home with you. Our renowned indigenous and educative session has been entertaining curious participants for decades. Mail us at etnianativa03@gmail.com to confirm your participation. Our facilities are close to the high rise Hotels area.

Article by Etnia Nativa. Call us or Whatsapp at +297 592 2702 and book your Aruban experience! Etnia Nativa is close to high rise Hotels!