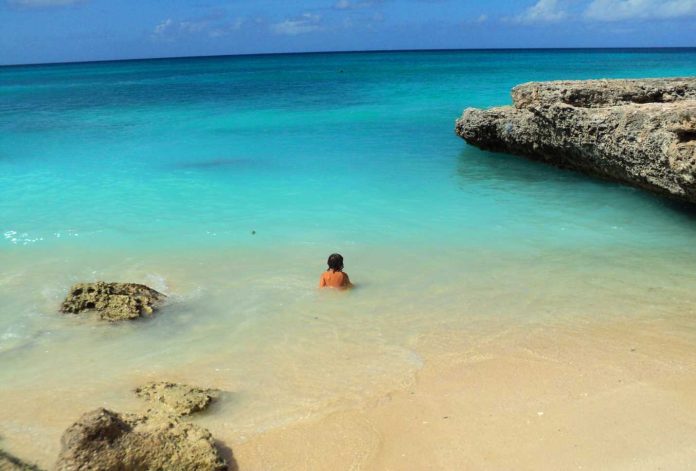 NOORD — Every week we share the most interesting and revealing stories in our articles regarding the Aruba you love, a beautiful destination to explore while finding out more over amazing events that will enlighten and spice up your vacation.

In the proses of discovering the islands landscapes and topography you will reach Malmok area, which offers a perfect and relaxing coast line and beaches. During your drive around you will probably notice and differentiate three basic geological formations: one is a hilly part; second an undulating part and a third part consisting of limestone which embraces these two zones and forming also the coast line.

The picture shows you how calm and peaceful you can swim in the Malmok area. Now for those who wants to know more about this beautiful and archaic site. There is a Malmok Paleo Lithic cemetery. This Stone Age site is situated at a distance of 200 meters south and 300 meters north of the sea parallel to the former Salina or salt-lake. The site shares its sandy subsoil with the salt-lake. This limestone is part of the Lower terrace formation, formed during a period of a rising sea level. Most commonly forms in clear, warm, shallow marine waters. It is usually an organic sedimentary rock that forms from the accumulation of shell, coral, algae Etc.

Most of the area in the Malmok site is flat terrain near the Salina. However some of dunes exist in the western part of the site. Rock markings and Turtle shell covered graves were found in the dunes slightly above the plain. This means that the dunes were already present in the period at the burial activities took Malmok place. The graves in their relations ship to the present surface suggest that the surface was essentially the same in prehistory as it is today.

The Neo Lithic agro ceramic tribes also occupied this abundant and resource full area, which marine supply must have sustain their peaceful existence. Relatives buried their dead’s in the ground near their settlement some with special gifts as social status distinctions in their grave. However others were found with seeds to be planted in the afterlife while a few with any traceable gifts at all. During rituals corpse where first buried in the ground, after a several months or even years, the bones were excavated, cleaned with meticulous care. These skeletal remains subsequently obtain their permanent resting place in a fairly small urn or vessel. Natives gave great care and devotion to their dead’s. So you must imagine that people since thousands of years where very grateful to have enjoyed the pleasure of this paradiciatic island for its clear, calm and generous nature.

Did you say you love Aruba its origins and cultural heritage? Visit Etnia Nativa and enjoy this unforgettable social encounter gets you into a real native home where you can capture your destination in both a memorable and immersive way. You will guide step-by-step for the best Aruba’s cultural ambassador and prominent newspapers columnist. Book your appointment mention this article and get a native gift: etnianativa03@gmail.com or WhatsApp + 297 592 2702