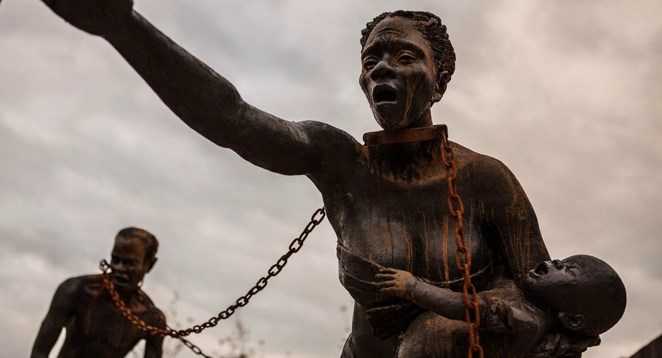 It was during the year of 1763 that the Fiscal of Noord Miguel Alvarez, sailed a lot between the islands and the mainland. During one of his trips to Curacao, approaching the slave place, he saw one man who was in dire healty conditions. Alvarez had convinced the slave master to let the slave go for a few ounces of gold, since he is not going to make it in those conditions.

The aruban Fiscal took him over to a friend’s house in Willemstad-Curacao. Here they took care of him for to be fit to sail over to Aruba. Upon arriving in Aruba, Fiscal Alvarez, a native Aruban converted to chatolisism, told his fellow men that he had bought this mans freedom since he was impressed and overwelmed with compasion when he say the way this man preformed the sign of the holy cross, the same way we do it he said. His name was Crisostomo and he was free again in the Aruba town of Noord. Over time, he learned some Spanish and was able to tell something about his life. Crisostomo was originally from Algeria in North Africa. His parents died when he was very young and that they were Christians, received a Catholic education and that he has been married to a good woman named Elena Petronilia and together lived happily in Algeria for 14 years. They had five children but four of them died when they were very young and only one Anastacio was alive when tragedy struck. One sad day, Arabs slave traders came to his small town. They broke into his house. They destroyed everything in it and put them in chains. Many times the sad memories made Crisostomo cry. Crisostomo said, “They treated us worse than animals, women and children separated from men. It could count more than two hundred people, captives, merchants, and hundreds of camels. We arrived on the outskirts of the port city of Oran at dusk and boarded a ship full of people ready to be sent to the new continent. Many people died during the long march ”. Crisostomo was shipped to Curacao. Crisostomo’s story reached Catholic priest Pedro Ramirez who lived in Caracas and occasionally visited Aruba. Since he understood some French, he could figure out where or what exactly happened to Crisostomo`s son and wife. The following year Father Pedro Ramirez wrote a letter to Crisostomo, telling him that in Caracas he had found his son Anastacio and that he would send him by ship to Aruba so that they could reunite again with his father. Anastacio had arrived to La Guajira where the priest Francisco bought his freedom and gave him a place to live in the monastery in Caracas. A year after Crisostomo and his son Anastacio were living in Aruba a ship sailing out of Maracaibo en route to the Dominican Republic, ran aground in the South Western part of the island. People of Noord came over to give assistance. Among the passengers was certain Mr. Morales, a Colombian gentleman, together with his family and two servants. They all were taken to the town of Noord. One of the servants who were traveling with the Mr. Morales and family was Crisostomo’s wife and Anastacio’s mother Helena Petronilia.