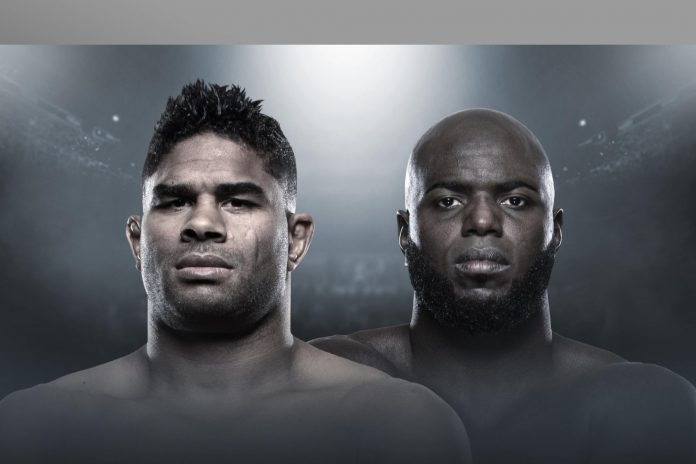 The UFC event can be seen on 34 HDMI TV’s, 6 Giant Screens and heard through a surround sound system in a fully air-conditioned comfortable bar. Join the Live Viewing Party event of BIGI BOYs upcoming UFC heavyweight fight at Double Down Sports Bar & Grill.

One of the breakout success stories of 2019, Rozenstruik has made short work of Junior Albini, Allen Crowder and Arlovski since joining the UFC roster, and now he’s eager to test himself against veteran contender Overeem, who has won two straight over Sergei Pavlovich and Aleksei Oleinik.

Already 3-0 start to his UFC career Jairzinho Rozenstruik with Gregory Milliard in his corner recently knocked out former UFC heavyweight champion Andrei Arlovski at UFC 244 and steps into his first main event December 7, event at Capital One Arena to take on Alistair Overeem. Alistair ‘The Demolition Man’ Overeem is looking to keep his championship hopes alive in the category. A perennial contender, Overeem has fought the who’s who of mixed martial arts throughout a storied career and has delivered spectacular knockouts on many occasions. He’ll be looking to secure his third consecutive stoppage win and stake a claim on a title bout.

Claudia Gadelha and Cynthia Calvillo will also battle it out in the women’s straw weight division, while Stefan Struve and Ben Rothwell step up in the heavyweight category. Rounding out the card is UFC top young gun, Aspen Ladd on a comeback after the controversial loss at the hands of De Randamie, she’ll be looking to make amends against Yana Kunitskaya in the women’s bantamweight division.

Don’t miss the fun this Saturday. The DD has a great bar, new chef with quality bar food (focus on the best burgers) and the perfect casino to play after the games.