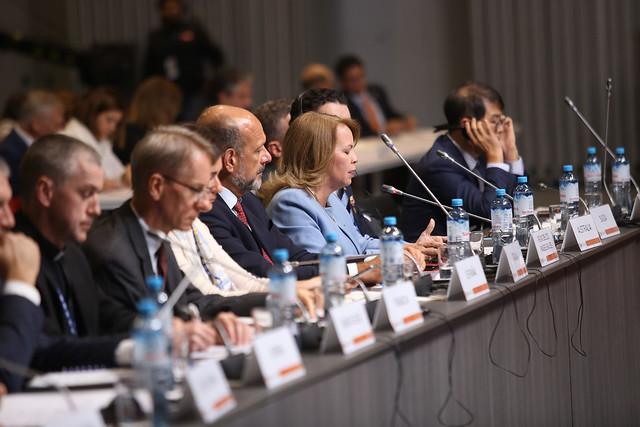 One very crucial topic is Venezuela, and the issue of the migration crisis due to the situation in Venezuela, because of a lot of violations of human rights in Venezuela, and the large amount of people who are trying to leave Venezuela. Prime Minister Wever-Croes on this topic informed about the impact of this migration crisis on Aruba and made an appeal for the countries to deal with this, being a very serious issue, and to deal with it together.

Other participating countries also expressed concern regarding this topic. Chancellor of Panama also commented that Panama sees a lot of suffering among people who leave Venezuela and try to arrive to the United States via Panama. He also made a dramatic appeal for the countries to work together to help those who want to leave Venezuela, so that they don’t have to risk their lives in dangerous situations without knowing.

She also elaborated on the disinformation campaign to convince Venezuelans to leave their country, making it seem as if it is very easy while not informing how dangerous it can be. This is also the case for those who want to cross the sea to come to Aruba without knowing that it is extremely dangerous.

The topic of human rights in Venezuela itself received a lot of attention. Attending countries commented that they cannot accept that violations of human rights are taking place in such a nearby country.

For Aruba itself, the prime minister spoke with representatives from various countries on the topic of sanctions imposed on Venezuela. Venezuela has heavy fuel oil that is a lot cheaper, for the crude oil that is necessary for WEB – the energy generating company of Aruba – to generate electricity.
If Aruba can import the heavy fuel oil from Venezuela for WEB, the price of electricity and water on the island would go down. However, there are sanctions and this prevents imports from Venezuela.

“During my meetings with representatives from the American government, I made an appeal to help us reach this cheaper oil from Venezuela”, Wever-Croes said.

On request from minister of Energy, Glenbert Croes, the Prime Minister held a dialogue also with the Chancellor from Ecuador to see if we can receive cheaper heavy fuel oil from Ecuador, because despite the Venezuelan oil being cheaper, the sanctions prevent imports from Venezuela. “For this reason I tried to open the way for minister Glenbert Croes to continue with meetings and negotiations”, she said.

“The topic of Venezuela had the attention of all participating countries during the 52nd General Assembly of OEA, and the countries agreed to continue deliberating on this topic together. Venezuela is a country very near to us with family and friendly bonds that are very strong, and only by working together we can find a solution to all existing challenges and limitations”, the Prime Minister commented.