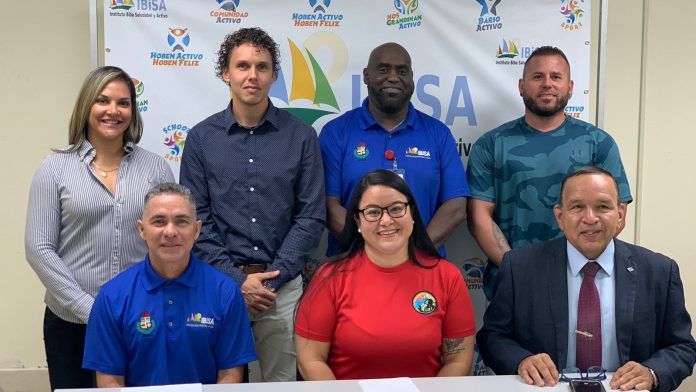 Yesterday morning, IBiSA held a press conference to present information regarding a Bike to bring awareness in the community regarding the risks cyclists face when training or competing on public roads.

Gelisa Angela, representative and member of Biking Squad Aruba explained that this foundation was established about two years ago by Rubert Paesh, with the goal of improving health, riding and having fun.

Currently they have about 50 members, and every week most of them are active, training at different parts of the island, since most of them have road bikes to use on the roads and reach trails and mondi.

Similarly there are other organizations that also practice and train, particularly when there are upcoming competitions. But sadly, according to Angela, they have noticed that recently there are a lot of accidents in Aruba with cars hitting cyclists, dogs coming out and attacking and biting the cyclists, and causing physical and emotional damage.

For this reason they came with the initiative to have an awareness Bike Tour Ride and for this they approached the minister of Sport, Mr. Endy Croes as well as minister of Transport, Nature, Integrity and Senior Affairs, Mr. Ursell Arends to discuss how together with IBiSA, the Department of Public Health (DVG) and the ministry of Sport to get this activity going for the 6th of November.

“We understand the comments of drivers saying that there are disrespectful cyclists, but we must say that sadly the respect that we do not receive is a lot more among the motorists, particularly when we are on the road. They don’t give us enough space and you need to see to pull all the way to the side for them not to hit you. This is why we need to create awareness”, Angela commented.

Edgar Erasmus from IBiSA declared that the bike ride has the goal of bringing awareness to motorists, but also cyclists when they are using the road, so that both can be aware of safety in traffic, to respect each other. The goal is also for dog owners to make sure to keep their dogs inside to prevent anything happening to cyclists or other people who use the streets.

IBiSA is helping with the process of organization of this activity which will take place on the 6th of November at ex-Bushiri Hotel from 6am to 12pm covering a distance of 50km. “A long distance, and this is the reason to do this for the member clubs. This is not going to be open for everyone, but only those who have a bike and can cycle a long distance. This is important to know”, Erasmus said.

The long distance was chosen because they want to ride through every district and neighborhood of Aruba in order to bring the message to everyone.

They have space for 500 participants 15 years and older, which means that it will be a large group taking to the road. “And for this reason we as IBiSA ask for motorists to be mindful on this day, that a large group of cyclists will be on the road”, Erasmus said. He also indicated that they have a permit for this activity and will count with help from the Police Department and the Red Cross. Each club is responsible for their members, Erasmus said, which means that if they get tired they will be taken care of.

Erasmus announced that next week they will be publishing different videos on social media and their website, as well as visiting radio stations to bring the message of awareness to the community the entire week.

Minister of Education and Sport, Mr. Endy Croes was also present at the press conference. He said that a few months ago he was approached by the leader of Biking Squad Aruba, Rubert Paesh and the board. They told the minister of their experience when cycling on the road during training and how many incidents take place. He decided to bring IBiSA on board to organize this activity, which took more than a month of preparation.

IBiSA is also preparing another Bike Tour for the 18th of November at the Sports Center in San Nicolas with a shorter route, where more people can participate.