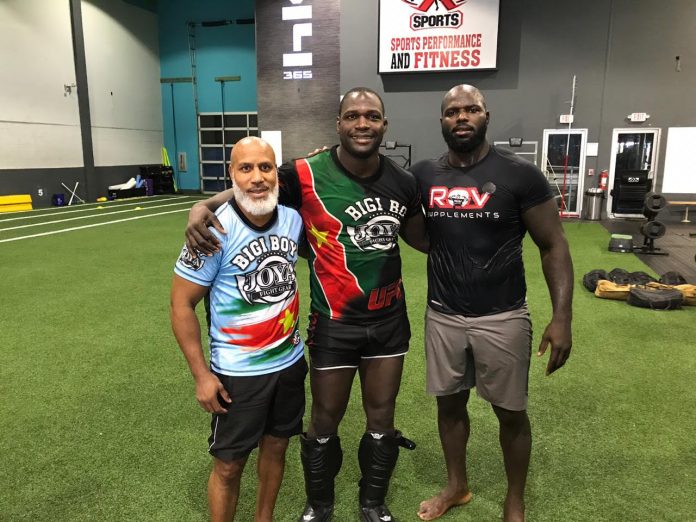 We have the main event Diaz vs Masvidal and among others on the undercard Arlovski vs Rozenstruik. Nice to know: Rozenstruik alias Bigy Boy from Surinam fighting in UFC 244 trains in Aruba with our local champion Gregory Milliard. The UFC event can be seen on 34 HDMI TV’s, 6 Giant Screens and heard through a surround sound system in a fully air-conditioned comfortable bar. Where? Eagle Casino and Double Down Sports Bar & Grill of course.

Diaz vs Masvidal (Main Event).
Nate Diaz came back out of your three-year-long lay-off in vogue in UFC 241 at Anaheim. Diaz set it upon Anthony Pettis at the co-main occasion in the Honda middle in route to a unanimous conclusion triumph. The audience was deafening for Diaz all day along with also his reunite had been affirmation he could be among those UFC’s most significant celebrities. Along with also, the pleasure didn’t stop with all this struggle. From the post-fight job interview, Diaz predicted his shooter to get his second struggle. When he receives his manner, Jorge Masvidal continues adjacent. And there isn’t really an enticing struggle from the welterweight branch compared to battle involving Diaz and also Masvidal. Following 15 years since a specialist with many conclusions in his own album, Masvidal (34-13) eventually located himself first rapping out Jake Ellenberger along with Donald Cerrone after which very not exactly out-grappling Brazilian jiu-jitsu genius Demian Maia. Following shedding to striker Stephen Thompson, Masvidal accomplished his transformation by journeyman to super-star this past year.

Kelvin Gastelum vs Darren Till.
Everybody else believed he had been also modest or way too huge, as well out of form, overly un-motivated, overly demanding from the relevant skills essential to allow it to be for being a UFC fighter. He had been attracted together gradually by UFC matchmakers, which left him to struggle 14 days before committing him an opportunity a title. Darren indefinitely does not rely on choosing an effortless route together along with his struggle livelihood, which explains the reason he hunted Kelvin Gastelum irrespective of protests out of UFC president Dana White.

The Surinamese heavyweight made quite the impression in his last outing who knocked Allen Crowder out cold in just nine seconds when they met at UFC Greenville back in June. It was the second-fastest knockout in heavyweight history.

That followed a TKO win over Junior Albini earlier in the year as “Bigi Boy” is 2-0 in the UFC as well as 8-0 as a professional.

Bigy Boy Rozenstruik now faces former heavyweight champion Andrei Arlovski at UFC 244 on November 2 and is looking to make yet another impression — this time, against someone he used to watch back in the day and in his corner he will have Aruba’s own a very accomplished local champion Gregory The Assassin Milliard who is Aruba Spartacus MMA head pro-am trainer and primary advocate for Spartacus fighters when it comes to matchmaking with promotions.

Should BIGY BOY defeat Arlovski, the unbeaten heavyweight could potentially get a ranked opponent next. However, he doesn’t have any name in mind — he just wants anyone he can get as per his corner man Gregory Milliard.