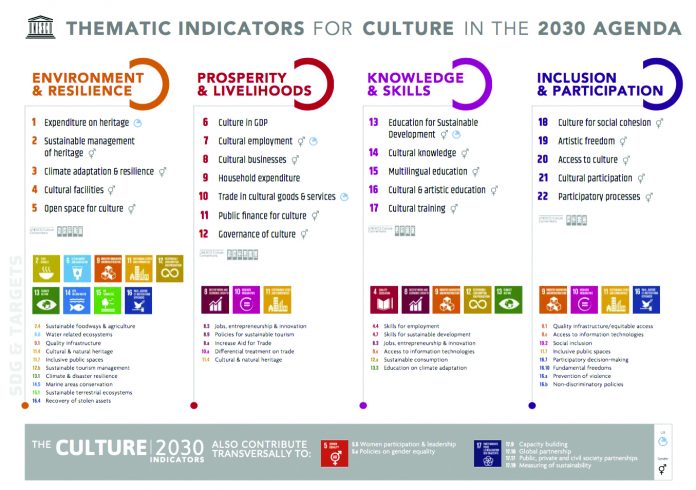 This week is an important week for cultural officials, policy makers, researchers, professionals and entrepreneurs all over the world. On November 19th 2019 within the Forum of Ministers of Culture, at the UNESCO headquarters in Paris, the “Culture|2030 indicators” was officially introduced. The Culture|2030 indicators is a framework of thematic indicators whose purpose is to measure and monitor the progress of culture’s enabling contribution to the national and local implementation of the Goals and targets of the 2030 Agenda for Sustainable Development. The cultural sector now has its own tools for effective implementation and stern monitoring with the vision of reinforcing the global cultural sector with sustainable targets. Ministers from all over the world were invited to be present and to establish the roadmap for the cultural sector within the SDG 2030 agenda. From the Dutch Kingdom, we took notice of the presence of the Minister of Culture of Curaçao who also shared a few words in the general assembly, emphasizing on the need for more participation of associate members of UN in decision-making and leadership locally and internationally.
Considering the ongoing global exchanges, UNESCO is aiming to strengthen its multidisciplinary scope and addressing the issue of sustainable development in an inclusive approach by emphasizing the synergies between culture and social, economic and environmental issues. Since 2015, the 2030 UN Agenda for Sustainable Development has been developing a common and diverse roadmap for sustainable development. The conclusion since then is that culture is at the heart of this vision, which is based on a project of more inclusive and resilient societies.

Forum of Ministers of Culture 2019
On 19 November 2019, UNESCO hosted the Forum of Ministers of Culture, a major event to discuss the central place of culture in public policies around the world and its impact on sustainable development. Even though Aruba’s Minister of Culture was absent, the Plenipotentiary Minister of Aruba and the Minister of Education, Science and Sustainable Development of Aruba together with more than 140 Ministers and high representatives were present to mark a high point during the 40th session of the General Conference of UNESCO. Interestingly, UNESCO, the only United Nations agency for culture, is returning to the tradition of ministerial meetings in the field of culture, 21 years after the Intergovernmental Conference on Cultural Policies for Development held in Stockholm, Sweden in 1998.

Continuing this new platform for priority setting and public policy development, this ministerial forum was an opportunity to make decisive progress on the role of culture in development and effective policy making thereof. There were four prominent themes that constructed the dialogue during the forum, which are: 1. Culture and heritage, a renewable energy for dialogue and peace; 2. Culture at the heart of education, a fundamental dimension for human development and innovation; 3. Investing in culture and creativity for sustainable development and employment; 4. Culture in the public space, a driving force for urban and social transformation. With no doubt it can be concluded that internationally culture is continuously being recognized as a vital component of sustainable development related to general economic growth of countries and social well-being of our communities. Aruba, within the vision of it becoming an innovative island of solutions in the Caribbean, we cannot afford to stay behind any longer. Culture, creativity, innovation are all interconnected and with effective policymaking can bring Aruba to the next level. As the Prime Minister of New Zealand recently expressed: countries need to stop talking about targets and start focusing on action.

The Culture | 2030 Framework.
The Culture|2030 indicators is a framework consisting of thematic indicators that intend to measure and monitor the progress of culture’s enabling contribution to the national and local implementation of the Goals and targets of the 2030 Agenda for Sustainable Development, both as a sector of activity, and transversally across other sectors. In short, this means that Aruba can use this framework to measure the contribution of culture in the implementation of the SDGs. It reaches out extensively to all economic, social, infrastructural and environmental horizons within a country. The Culture|2030 Indicators combine a variety of data, including quantitative and qualitative indicators, and will rely as much as possible on existing data sources within a society. All data collected in Aruba will contribute to the formation of a global overview of the state of progress of the contribution of culture to the 2030 Agenda and also within the Caribbean region.

The framework is divided into four dimensions (sections), which include: environment and resilience; prosperity and livelihoods; knowledge and skills; and inclusion and participation. Each section is further clustered in sub group themes, which are related to the SDG targets. This overview of the cultural thematic overview is the exact example of how culture, creativity, and knowledge can foster innovation, or the fact that the creative industry in synergy with the knowledge economy can stimulate innovation in societies. This report can serve so much information and tools for government officials, government institutions, local NGOs, education institutions, academic institutions, community organizations, and the overall civil society, on how to draft grant proposals, policy reports, project proposals and research projects.

The “Creative Islander” and the Culture | 2030 Framework.
The main purpose of the Creative Islander is to in a critical way communicate, inform, and raise awareness on the importance of creativity, culture, knowledge for innovation and sustainable development. By doing this we start the dialogue and provide fact-based evidence on global and regional developments on these topics, so that together we can make a difference in our community. In the coming months the Creative Islander will break down the Culture| 2030 framework into smaller pieces according to the four dimensions. Special attention will be drawn to how Aruba can use current best practices to solidify this new shift in the cultural sector. So, stay tuned for more dialogue on how culture can accelerate innovative sustainable development on Aruba.

Exploring the Role of Museums in the Aruban Society