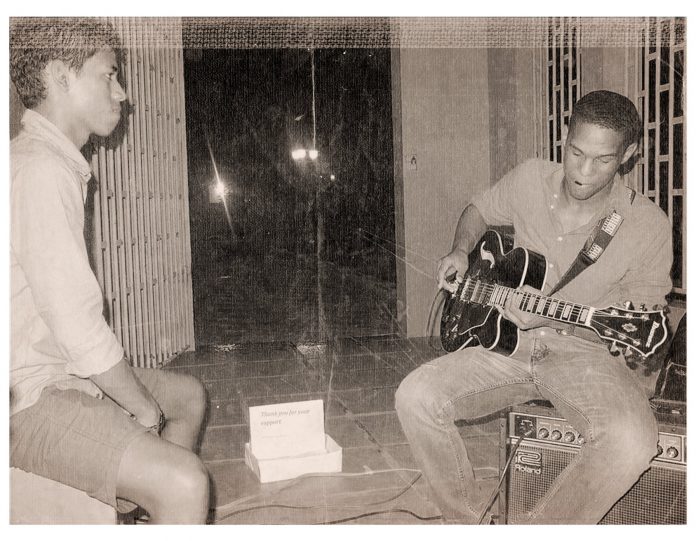 On February 1st 2020 the official launch of the Krosshart project emerged on the Aruba. A groundbreaking and innovative initiative by two young and talented Aruban musicians who have dared to envision the evolution of traditional Aruban music. Like Plato states, “music gives a soul to the universe, wings to the mind, flight to the imagination, and life to everything”. Aruba in its essence is filled with cultural and musical traditions that have anchored the artistic foundation of the island. Traditions that have made us unique in the world and traditions that have carried our identity over the decades. From the synergies between Afro-European cultural and musical influences we now have our own Dande, and our own interpretation of musical genres such as the Tumba, Wals, Mazurka, Polka and so on. Now, well into the 21st century we have reached a point of a “cultural disconnect” between the older and young generation.

A “cultural disconnect” in the sense that there seems to be a challenge of diffusing Aruban cultural traditions to the next generation. There are numerous theories and explanations for this, but the essence and the priority should be to reduce this disconnect. Throughout the Sustainable Development Goals of the UN, the outlook remains on finding the sweet spot between preserving as much as we can, while also stimulating innovation. So, in this positive spirit of finding a solution, let’s highlight this cutting-edge project, so continue reading and see how you can be part of it as well.

The krosshart is a concept created by Siegfried Hart and Chris Kross approximately 8 years ago. Since then, they have played numerous times at The Caribbean Sea Jazz Festival and been involved in various cultural developments on the island. As time passed, this became a family of ingenious minds collaborating to express their vision and play part in the further development of the Aruban musical heritage. In the meantime, they both crossed Aruban borders to pursue their education (in music), Chris Kross in the United States and Siegfried Hart in the Netherlands.

According to the Krosshart project, each generation is responsible to put their stamp on the local artistic and cultural evolution within the community. This project’s vision is to achieve this by innovating Aruban traditional music by combining multiple Aruban genres together and with other genres as well, without disrupting their fundamental rhythms. “This is done by using primary parts of each genre that fits together and the experimentation with rhythm, harmony, orchestration and sound design. Creating new sub-genres with diversity in rhythm and color. Genres we experiment with: Dansa, Wals, Tambu, Tumba, Seu, Soca, Hip Hop, Jazz, Classical music, Bossa nova, Candomble rhythm, Calypso, Zoukous”.

Now both these musicians are collaborating with other Aruban talents who are Lidrick Solognier, Jose Croeze and, many other musicians to create this innovative album. Considering the dynamic nature of the arts, this album will be enriched with synergies between traditional and modern genres, rhythms, and constellations aiming at preserving Aruban musical tradition and culture for the future generations. In the same way, the past generation of inspiring musicians made history, for example; Rufo Wever, Padu, Rudy Plaate, Macai, Doble R, Randal Corsen, Hildward Croes, Ivan Jansen, the Krosshart project hopes to contribute in their own capacity, creativity, talent, passion, and ultimately love for the Aruban culture towards safeguarding our musical and cultural heritage.

The focus behind the Krosshart concept is to educate and create awareness, especially the younger generation, on the Aruban musical tradition, culture, and heritage. Also, to inspire other musicians to use their own traditional genres and rhythms in such a way that they are open to the experimentation, exploration, and expansion of musical possibilities to further revolutionize them with the sole intent to preserve cultural heritage.

The addition, the Korsshart projects hopes to serve as an example of evolution of the traditional music of the ABC islands but also to create a more attractive sound for the younger generations and other genres enthusiasts. This project will directly benefit our musical tradition and culture by preserving its core aspect by innovating the sound. Therefore, expanding the reach and potential of our traditional musical aspects, does not only reach the Caribbean but opens the door to the world. Moreover, this will be beneficial to the youth and up and coming artists of the Dutch Caribbean, as inspiration to experiment more with local, traditional and cultural sounds.

Also, the well-known segregation between musicians, meaning the ones that studied music at an academic level and the self-taught musicians, will be faced. We are playing the music of all styles and using all types of musicians, academics and self-taught. This promotes inclusion and collaboration within the Aruban Music Industry. At the end of the day, it is all about the music and the Aruban people who uplift it. The Krosshart project confirmed this by stating: “we need to come together and put our differences aside and make more meaningful music”.

The Creative Islander would like to wish Chris Kross, Siegfried Hart, and the entire recording team much success with this new endeavor. The Aruban society and Music Industry will truly benefit from this innovative and daring project. Music is for everyone and should evolve for the future generation. For any questions regarding the crowdfunding campaign or Krosshart project, feel free to contact them through email at krosshart.project@gmail.com or by visiting their website at http://krosshart.com/. They are also present on social media platforms such as Facebook and Instagram. Are you inspired and would like to donate and support this project? Feel free to place your contribution on their go fund me page on the following link: gofundme.com/krosshart. For convenience, contributions are also welcome on the following Aruban bank account:

Choose what you Love to Study