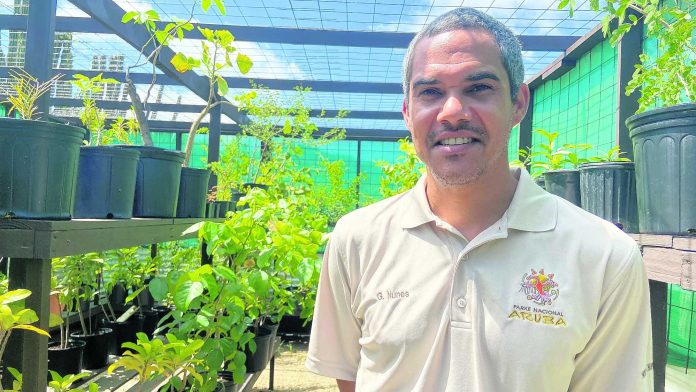 During a conversation with Giancarlo Nunes, Research & Conservation Manager at Aruba National Park, he said that his work can be divided in two parts: one is species conservation, and the other is habitat, that is, the ecosystem in which the animals live.

It is important to focus on both at the same time, and regarding habitat, a lot of times this has to do with flora, the vegetation of Aruba. Visiting the Green House, the Center of Cultivation at Aruba National Park, once can see that this is going very well in the process of cultivating plants that are being lost, and that are very important for our local ecosystem.

“The vegetation in Aruba was heavily damaged since the times of colonization already, the plants received a lot of damage and a lot of plant species were lost that way. The colonizers also introduced goats, donkeys and cows, and these caused that the plants could not grow back”, Nunes commented. The cutting of plants is the way in which we lost our native plants, and introduction of other types of animals ensured afterwards that the big ‘mondi’ – Aruba’s wilderness – could not grow back. Now, 500 years later, we can see the Aruba that resulted from these developments; we have a lot of cacti and thorny plants, which is not the Aruba of the past, according to Nunes. We used to have a lot of fruit trees, a lot of medicinal plants – which the goats also enjoy – and these seeds are in the soil, but don’t get a chance to grow back.

Aruba National Park Foundation is busy for four years already with their project Center of Cultivation. It began with an analysis of the situation, finding information about species of Aruba’s flora that are native to the island and are being lost.

Palicia Cora, for example, is a very important plant for the animals of Aruba, the native birds. There are less than ten of these left in the wild. “Because there are so few, this is one of the plant species that we are focused on bringing back, and this is the basis for the program to expand flora diversity in Aruba, especially in the park areas.”

An analysis was carried out to see which plants are very scarce in Aruba, in order to cultivate them and begin introducing them once again in the park. Expanding the diversity of the local flora automatically means that the diversity of our fauna will also expand; with more food for our birds, more areas for our insects, etc.

Life itself will expand on our island if we make sure that the habitat, the flora, the vegetation of Aruba is healthier.
The idea for the Center of Cultivation is to plant these types of vegetation in the park. Some tests were carried out already, and currently they are busy testing various ways to plant; but the areas outside cannot be compared to the National Park, for example. “We need to see what we will do in the areas of the park. We have learned a lot and we have reached the point where, once we have grown a lot in the greenhouse, we can begin to fill the Park once again with plants that are native to Aruba, which a lot of people don’t even know they exist anymore”, according to Nunes.

Last April, on Earth Day, Aruba National Park announced the introduction of the Center of Cultivation.

The Center of Cultivation is an investment thanks to funds of Prins Bernhard Cultuurfonds Caribisch Gebied and donations from Aruba Airport Authority. This project is a clear example of the Earth Day 2022 theme, which is ‘Invest in Our Planet”.

The Center of Cultivation is the heart of FPNA’s Flora Biodiversity Enhancement and Climate Resilience Program. This workspace includes a seed bank, a workshop and plant nursery, and a composting station.

The seed bank will be utilized to store the seeds of more than 40 species of native and endangered species of shrubs and trees. The seeds will be used for cultivation but will also be stored to ensure genetic survival in case of pests and disease. The workshop adjacent to the plant nursery will increase the success rate of germination and propagation of young native flora, and the nursery area will be used to cultivate plants and taking care of them for one to two years until they are ready for outplanting and able to survive in our protected nature areas.