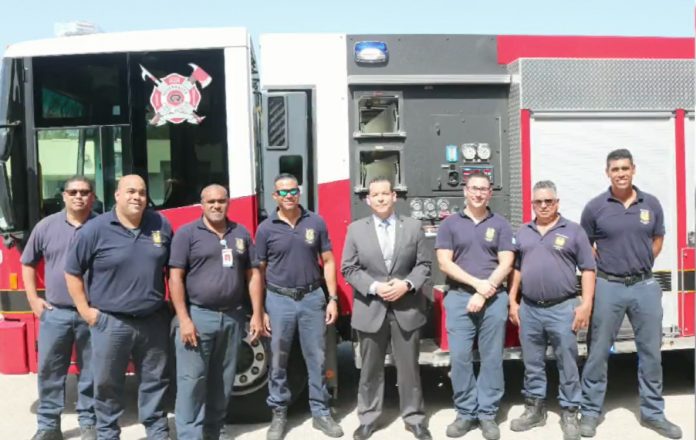 Monday morning, minister of Justice and Social Affairs, Mr. Rocco Tjon during a press conference informed about renovations at the Fire Department, a department that went through many challenges in the last few years; many challenges which, together with management team, labor union and personnel they were able to overcome.

Also last week, special clothing arrived to the island so that all firemen can carry out their duties more safely.

During the press conference, minister Tjon showed some images, which the reader can also appreciate in this edition, that illustrate the previous condition of one of the old truck’s tire, as well as showing how the crew went to work with broken shoes. He commented that the conditions in which they were carrying out their duties were not optimal and this presented a risk to their safety.

According to the management plan for the Ministry of Justice and Social Affairs it is important for the crew carrying out their duties to receive the proper tools in order to do this optimally, and most importantly, while keeping themselves safe.

Last week the department also received oxygen machines that were ordered for each fireman, so that the following years the Fire Department will be properly equipped with these. The last time such machines were purchased was back in 2003 under Cabinet Oduber 1, and in 2018, ex-minister of Justice, Andin Bikker also bought a few for a group, but not every crew member was able to receive one. Aside from the oxygen machines, the department also received new gloves and helmets and other tools for their job.

Tjon showed images illustrating how the trucks that were recently purchased are already in production. It is known that these trucks take a long time to be completed.

Aside from materials, Tjon also finds it important to regulate the legal position of the workers. This is also an area where the department confronted many challenges. Tjon said that during the past months, he worked together with the labor unions, management team and the Department of Human Resources in order to catch up with some backlog. He announced that all promotions that had fallen behind are now at the Cabinet of the Governor, His Excellence Alfonso Boekhoudt for his signature after being approved by the Council of Ministers. Now this is in the final phase for the Fire Department, where many workers had to wait years in order to regulate their legal position, according to Tjon.

Tjon also informed about agreements that were reached with American companies regarding training for the crew of the Fire Department. They have received information and much needed training, according to what was informed by the labor union and the management team. Before, the last training took place in 2007, which means that for many years the personnel did not receive adequate training. Aside from promotions, there was also courses that were backlogged for the personnel, and some of them have already started while others will begin next month.

The Fire Department Post in San Nicolas is in the middle of renovations, according to Tjon, and will be completely done by the end of the year.

He pointed out how the labor union constructively gave attention to all these aspects that for many years were the source of unhappiness in the department. He announced that the budget for this department per year is about two million Florins. In order to attend to all the above mentioned issues, Tjon said that he earmarked another 7.5 million in the budget to take all these aspects into consideration.

Aruba to me: Joseph Davis & Family