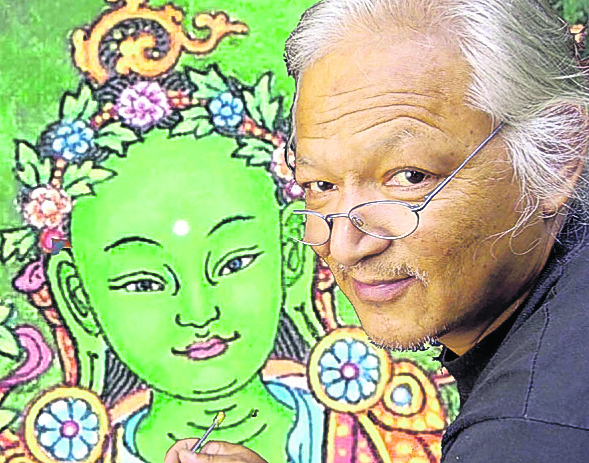 ORANJESTAD – Karma Phuntstok (1952-….) is a Tibetan artist presenting the art and painting of Thanka. In the light of the International Day of Mother Language, Biblioteca Nacional Aruba, Departamento di Cultura Aruba and Instituto Pedagogico Arubano invite everybody from 6:30 PM to enjoy this creative and interesting event.

MirtoLaclé, cultural gestor, will take care of the introduction of a special evening where he will explain the relationship between Language (literature/linguistics) and art.

What is Thanka Painting?

A tangkastnet, or also called thangka, tanghka, thanka, is a Tibetan paintingof Buddhists on cotton, cloth or skin. Normally the images are of Gods, scenes or Buddhist mandalas. Karma Phunstok was born in Lhasa, Tibet. Together with his family he had to flee to India because of the invasion of China in Tibet. There he studied painting art. In 1973 he learned the traditional art of Thanka painting in Nepal. From that time on he produced paintings with the theme of Buddhism in Tibet. In 1981 Karma migrated to Australia where he still lives in the ‘bush’ of the Northern part of Kyogle with his wife and child.

Collectors from all over the world purchase his paintings and they were published in various magazines. His paintings show a combination of traditional techniques and symbols with modern inspiration. Karma’s art is very unique and dynamic. His way of life and life experiences are to be traced in his art, from his childhood in Tibet to the refugee life in India to his life in Australia’s nature. This combined with his admiration to his Holiness, Dalai Lama. The international artist has a private collection that goes around galleries in the world

Sponsored by Setar: The Flag of Aruba