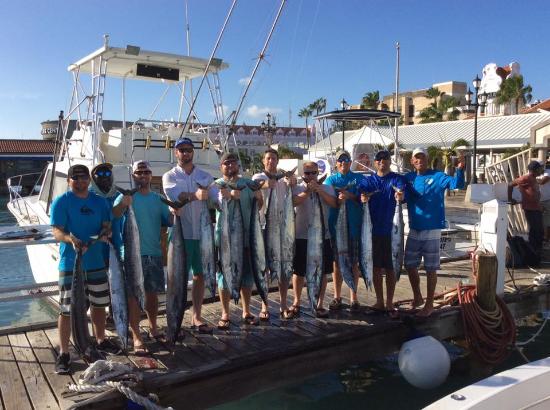 ORANJESTAD – The headline news this month for fishing in Aruba are Wahoo, which are making a lot of noise around the island. March is a pretty busy season for local charters as scores of local anglers get out to get the fish. But there are also plenty of first time fishers flying in from around the globe.

Besides voracious Wahoo, anglers have been catching Kingfish (King Mackerel), Mahi Mahi, Barracuda, Tuna, and Bonitos. Tuna fishing is really productive right now and these brutes are crashing the bait with no abandon. Captain Roberto Tromp of Dorothy Fishing Charters says that you can also catch Billfish from time to time. His numerous repeat customers come back to test their skills against the local fish.

The weather has been mostly sunny, with pleasant temperatures around 80°F (27°C). Some days are cloudy with a chance of light rain, which is likely to be the case later in the month, but that won’t stop the fish nor the fishermen. If you’re here for the first time, don’t be surprised by windy conditions which can sometimes make fishing a hit-and-miss.

But even despite the tricky weather conditions, the fish are definitely here and are making an
appearance around the island. Out of Noord, anglers are coming back to the docks with a good number of Bonito and some impressive Wahoo. If you set out of Oranjestad, you can winch up Mahi, Barracuda, Tuna, and Wahoo. The crew of Toons Joy Sportfishing NV reported good fishing opportunities around the south of the island.

They have mostly been trolling and following the fish. Again, the weather dictates where the fish are, so you will need to put in some effort to land your prey. On a productive day, fishermen are getting big Wahoo and Mahi within 40 minutes from the dock, with a constant bite throughout the day.

Fishing Report for the month of August 2018