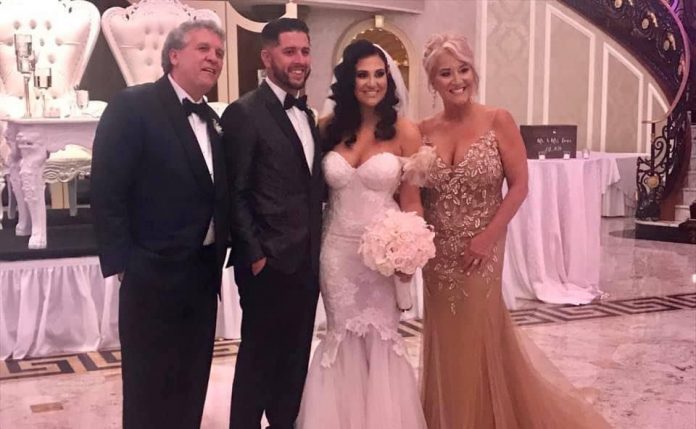 NEW JERSEY — Dede and Ricky Grosser from Rochester, New York have a soul connection with the island of Aruba. Recently Aruba Today portrayed this amazing couple and their story which is actually all about being kind and spreading love. Nothing but good can come from that and so their beautiful daughter Milan took that love upon her in her own life, resulting in a blessed relationship with her now husband Billy. Have a look at their fairy tale wedding where even Arubans attended proving the connection between this family and our island. We are honored to be able to share their love story in our newspaper to inspire our readers with the message that gratitude and love are all that matter.

Dede and Ricky fell in love with Aruba on their first visit to the island in 1991. For the last 28 years, they have been staying at what is now Barcelo Aruba, the resort has changed brands and names during the years but they stayed loyal to the resort. For the past 15 years they’ve spent their vacations here four times a year. They bring their family, about 50 people, in June every year. We can – without a doubt – call them VIP Ambassadors of Aruba. Their daughter’s wedding took place last month and many Barcelo Aruba guests were invited. They travelled from many states like Ohio, Connecticut, Texas, Arizona, New York, Tennessee, New Jersey, Rhode Island, Delaware and one guest even flew from Great Britain to join the celebration. Ricky: “Since we’re at Barcelo during January, April, June and October, we had individuals from all those months attend. Also staff and Arubans joined in the momentous event. That’s a huge commitment on their part. Wow, it was emotional.” It clearly represented what the couple discussed with Aruba Today before: Barcelo and Aruba is much more than a vacation to them. “We’re a family. The wedding venue and the hotel we occupied for two nights and we were amazed that so many friends we vacation with from a small island, would bring so much love and respect back to the states. It was beyond beautiful, our housekeeper and her supervisor attended! Dede and I were beyond humbled. The outpouring of love and respect for each other was overwhelming. “He believes it demonstrates what the island and resort carries over when being off the island as in lifelong friendships that have become family. “We are truly blessed discovering Aruba, in 1991.” Guests started arriving Thursday August 15 and the wedding took place on the 17th. Everyone departed on the following day August 18. It was a glorious weekend together and the family feels blessed with the shared love and the deep connection they feel for Aruba. Ricky even opened the Facebook page I Love Barcelo Aruba Group creating a meeting point for travelers to the island. Aruba Today congratulates Milan and Billy with their wedding and wishes them all the love in the world.q Music mainstays and newcomers speak out on Grammy inclusion

January 28, 2020
"I think if they smart, they listen to Diddy," soulful singer Lucky Daye told The Associated Press on the red carpet.