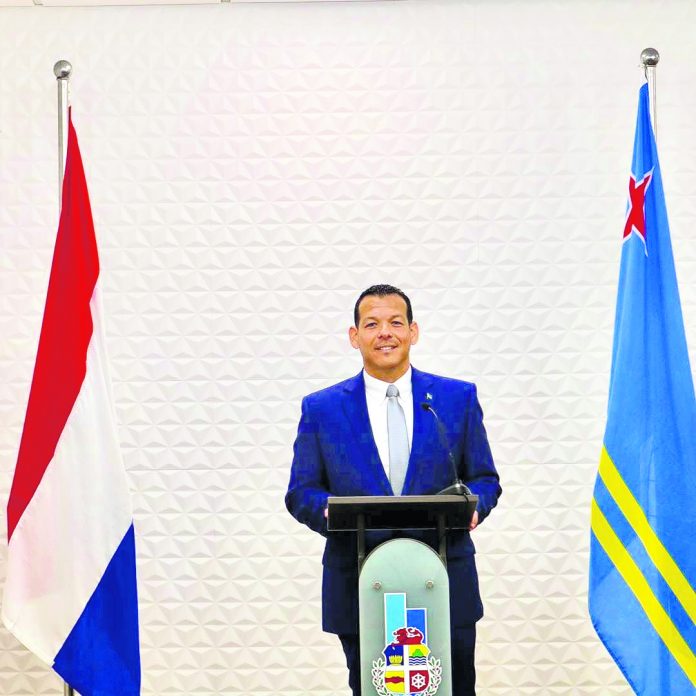 During a recent press conference, minister of Justice and Social Affairs, Mr. Rocco Tjon announced that the Council of Ministers approved a sum of Afl. 600,000 to start with a project dedicated specially to dealing with the problem of homeless addicts in Aruba.

“I am standing here today with a lot of satisfaction to announce that last Friday, the Council of Ministers approved Afl. 600,000 to deal with this problem”, Tjon said. He explained that these funds will be allocated to Stichting FMAA, which in the future will be Stichting Hunto (‘Together Foundation’), together with SPD (Department of Social Psychiatry) to execute this project in a responsible and integral manner to deal with the problem of addicts on the streets.

Before giving any details, the minister thanked all professionals present at the press conference and also the steering group GGZ. Studies in the past have noted that there is a need to close the gap between mental health aspects and addiction aspects.
Tjon commented that he has spoken to professionals on the field, and more and more they speak of a double diagnosis, which means that the clients don’t have challenges on one aspect only, being addiction, but they also have challenges on the mental health aspect. This is why all these projects are born from the steering group GGZ.

Tjon indicated that seeing the multianual plan of the Ministry of Justice and Social Affairs, this project, ‘meddling’, deals also with homeless addicts in a proactive manner on the street, it is part of it and this was already announced back in 2021 during the debate for the 2022 budget.

“What’s good about this project is that this aspect will be dealt in a durable manner. There are funds set aside that were already approved for 2022.” He continued explaining that on the 1st of September, the team of professionals will have to being their work. But at the same time, there is also approval for funds to continue in 2023, with a plan for 2024 where Stichting Hunto will make a request based on their regular subsidy to continue work in this area.

These funds mean that five more professionals can come on board to work on this project full-time. This means that in a proactive manner they will approach the homeless addicts and make sure to place them in one of the centers.

Regarding the centers, Tjon explained that in the beginning this will be the centre at Meiveld, but in the context of this project, an extra sum of Afl. 100,000 to refurbish four rooms in Centro Colorado, four rooms which mean 16 to 24 beds where the addicts can receive the help they need.

Tjon commented that obviously there are other aspects that need to be taken into consideration. When a person is taken from the streets, they must receive the care that they need, which also includes aspects like food and hygiene products that they might need.

“In the context of this project we took into consideration all the funds I have mentioned in order to take a durable and structural approach to this problem”, he highlighted.

Tjon explained that this is one part of it. There is a long term vision, which is an aspect that was reached by steering group GGZ together with Panamerican Health Organization (PAHO), but there is also a short-term vision and the abovementioned projects were born from these plans.

Tjon commented also that today a project will launch for the infrastructure of Stichting Hunto, where SPD together with FMAA (Foundation for the Management of Addiction) will be housed in one building, so that the processes are better aligned and they can provide better care to all those in need; not only adults, but also children and young persons. Soon, other projects will be announced. Tjon commented that FADA (Foundation Anti-Drug Aruba) has some projects that they will announce shortly, as well as another project by SPD. And on the side of education, there are also some initiatives starting.

“Afl. 600,000 was earmarked to deal with homeless addicts, particularly in the city centre. This will obviously increase security, will reduce nuisance for all those visiting our centre, and will create a more beautiful city”, Tjon emphasized.

Regarding the current legislation which does not force any addict to register or seek help, but rather keeps it voluntary, Tjon indicated that the laws are staying the same. He said that the long term strategic plan has various groups working, and one of them is working specifically on legislation. The minister highlighted that legislative processes take a long time, but attention is also being given to them.

He added that during various conversations with all professionals on the field, the aspect of ‘meddling’ is a proven concept. Even though receiving help is voluntary, the professionals in charge of providing help will receive specialized training on how to approach the subjects and execute the project.

“A proven concept in the Netherlands, a proven concept also in Bonaire where the results of scientific investigations show that when you as a professional manage to convince the person needing help based on the tools you received during training, the probability that the person will succeed with their rehabilitation is also greater”, the minister finalized.