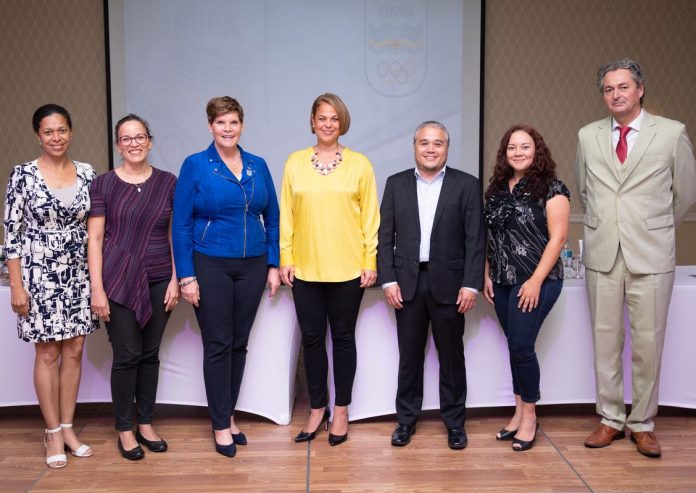 The President of the International Olympic Committee, Mr. Thomas Bach, will visit Aruba on March 10th and 11th, 2023, as part of a visit to the different IOC Members in the Caribbean region. This visit was announced by Mrs. Nicole Hoevertsz to the COA members during the COA General Assembly this past December.

In preparation for this visit, the beautification project of the COA offices has been made a priority for 2023. The President of PanAm Sports, Mr. Neven Ilic, will be accompanying President Bach during the entire tour of the Caribbean region.

At the COA General Assembly, held on December 17th, the Member Federations unanimously elected Mrs. Juelle Thodé as the new Treasurer of COA. Mrs. Thodé has a long history of involvement in sports, having served as President of the Aruba Cycling Federation, as well as Board member of the COA, and even as Chief of Mission for several editions of regional and continental Games. The position of Treasurer was previously held by Mr. Giovanni Bermudez, who had to resign earlier this year due to health reasons.

In the newsletter, president of COA, Wanda Broeksema reminisced on the achievements of the COA in 2022.

“We are proud to report that at the South American Games in Asuncion, our athletes won 3 gold and 3 silver medals, placing Aruba as the 10th highest medal earner out of the 14 participating countries. In November, we also competed in the Central American and Caribbean Beach Games and earned a gold medal in iQFoiling. At the first edition of the Caribbean Games, where COA participated with a small delegation, consisting of only two female athletes (in swimming and in open water swimming), the results were outstanding. Participating in a total of four events, our athletes were able to win a medal in each one of the events in which they participated.

“However, we also recognize the need to continually improve and identify areas for growth. In 2023, we have four major games on the horizon, including the South American Beach Games in Santa Marta, the Central American and Caribbean Games in San Salvador, the World Beach Games in Bali, and the PanAmerican games in Santiago.

“Additionally, we have ongoing projects such as the visit of IOC President Thomas Bach in March and the redesign and reopening of our offices, a project which we call “All Hands on Deck”. It is important to note that funding remains a challenge. While we are proud to have signed an agreement with the Aruba Tourism Authority (ATA), we are actively exploring further to find ways to secure the necessary resources.

“We must continue to cultivate a culture of inspiration and motivation as we work together to advance sports in Aruba.This year, the new leadership at COA has faced a number of challenges. This includes the resignation of our colleague Mr. Giovanni Bermudez for health reasons, and the undertaking of an audit process, as part of an integral monitoring process of all NOCs that Olympic Solidarity applies annually. In August, we organized three evenings of workshops on important topics such as the role of “Stichting Sportsubsidie Aruba” (Aruba Sport Subsidy Foundation), financial administration, leadership, branding, and marketing. We received positive feedback and will consider your suggestions as we plan future workshops.

“Looking ahead to 2023, we remain optimistic and believe that there are great opportunities ahead for COA and the federations. As always, we will maintain the Olympic Values as our guiding principle as we continue to support sports in Aruba.”

Aruba welcomed more than 10 million tourists in cruise ships on...