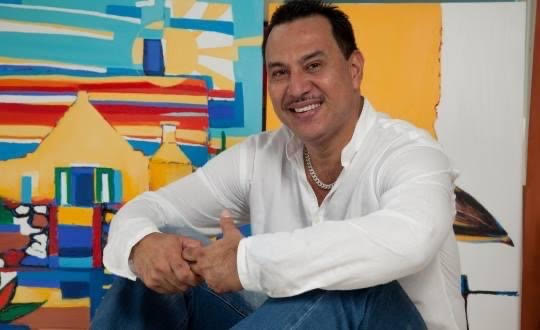 He had barely a few hours to complete the painting of House Ecury for the unveiling ceremony of the 103rd commemorative house of KLM, but the challenge didn’t affect Elvis Tromp’s (59) concentration. Not even with all the guests around him, chatting, asking questions, was the painter hindered in his goal, which was making sure that there is a completed painting ready to be gifted to the director of KLM for a special moment for Aruba and for KLM. 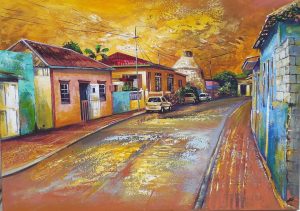 And those who know Elvis know that this is the way the Aruban painter works. He has a wide portfolio of remarkable paintings, most of which a reflection of landscape and architecture of Aruba. But perhaps what is attractive is that Elvis is a tax controller during the day, even though his intention was never to become a tax specialist.

Quite the opposite, Tromp’s intention was to learn information technology combined with art studies, but life had other plans for him.

Elvis always knew that his passion was in painting. His father worked as a house painter and would bring the rest of his paint home, where his son would observe all the colors, the mixes, for as far as he can remember, this allowed the child to experiment.

“I started drawing with pencil, but I began using paint when I was seven years old”, Elvis told us. The reason he knows it was that age so clearly is thanks to neighbors who had his paintings stored from the time he was that age. “I know for sure in any case that at that age I was already using paint.”

It was his father, a sculpture, who stimulated Elvis’ creativity, and he began selling his art from a young age. He sold his first painting when he was ten years old. “It was a painting of Alto Vista. The paint wasn’t even dry, but even like that I sold it.” Elvis determined the price himself. “It was a very low price. But the late Julie Oduber was selling my paintings and one of her assistants said that a collector in the Netherlands had 24 of my paintings.” Elvis wasn’t even 15 years old.

Elvis’ intention was to save money to go study in the Netherlands as soon as he finished Colegio Arubano (Aruba’s highest secondary education). It was his cousin who came with a letter already written for Elvis to just sign to apply for a job at the government. “I filled it in with the intention for working there temporarily, and then go study.” Elvis got the job and right away began completing courses, and in three years he became deputy commissioner, something that normally takes a lot longer to achieve. “Every day after work I would study and that way I grew. By then, I bought a car and was tied to other expenses which made it difficult to leave Aruba.”

Even so, Elvis retained the ambition to continue studying and received the opportunity to follow an internal course for tax controller organized by the Tax Department at the University of Aruba, for which a teacher came from the Netherlands. And in two years, Elvis specialized in tax document control and other areas.

Because Elvis studied in Aruba, he didn’t realize his ambition to go to an art academy in the Netherlands. “But many people told me that perhaps it is good I didn’t go, because in an academy they can push a student in a specific direction. This allowed me to develop my own technique.”

Elvis Tromp is autodidactic when it comes to his art and his ambition was to become a really good painter. He had to teach himself the techniques that could’ve been a lot easier if he had studied art. But his discipline pushed him to learn everything, even the ones he didn’t like, like the impasto technique that has a lot of texture and from paint leads to creation.

Elvis knew he liked fine paint right away, “but after a lot of practice, I realized I got the technique and I liked it. After that, I realized that impressionists painted like that, a long time ago already. So I realized that I discovered something for myself that already existed for a long time.” And when Elvis realized this, his own paintings started reminding him of the work of impressionists who in the first instance he didn’t like, because he liked realistic art.

Elvis’ life was marked by two extremes, a very rigid job and his art where he determines the limits himself. “Perhaps that is what keeps me in balance”, Elvis commented. “I put a lot of time in art to compensate my work that affects people.” His hope is that one day he can dedicate completely to his art, where he can affect people in the way he wants. In the meantime, he can count on a family that supports his passion. His wife and children know that in the hours after work, Elvis is in his studio, painting. In the weekend he spends some hours doing chores around the house, but always reserves some hours for painting.

Elvis’ trajectory, from the child who taught himself to paint, to one of the impressionist painters most appreciated in Aruba, continues. His vision for life after retiring from public service is one dedicated to his art. And as he painted for the event for KLM, the reality is that Elvis Tromp will only continue spreading his artistic wings even wider.