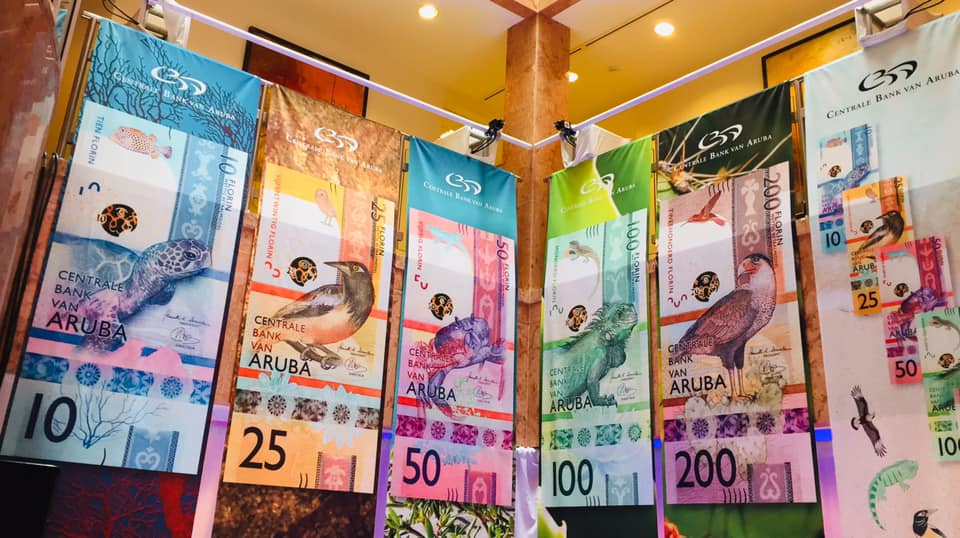 During this journey, the CBA worked in close cooperation with several local artists, various local and international experts from central banks and private sector consultants, as well as the internationally renowned banknote producer Crane Currency. The CBA expressed gratitude and presented a small token of appreciation to those present.

Hereafter Mrs. Semeleer invited Mrs. Evelyna Wever-Croes, Prime Minister of Aruba, and Mrs. Xiomara Ruiz-Maduro, Minister of Finance, Economic Affairs, and Culture, to jointly unveil the designs of the new 2019 series florin banknotes. The main theme of these banknotes is “Life in Aruba”, containing elements of the Aruban flora, fauna, cultural heritage, monuments, and landmarks. Apart from the very colorful designs, these banknotes also contain the most advanced security features available on the market.

With the introduction of the 2019 banknote series, the CBA aims to maintain confidence in the florin and contribute in promoting the uniqueness and beauty of Aruba’s flora, fauna, cultural heritage, monuments, and landmarks. For future generations to be able to appreciate this as well, it is of utmost importance to continue to promote public awareness for the adequate preservation and conservation hereof.

The timeline for the emission of the new 2019 series florin banknotes is as follows:

In the coming months, the CBA will conduct extensive information campaigns through various media channels, such as newspapers, radios, TV, and CBA’s Facebook, Instagram and website in order to provide the public at large with important information about the new 2019 series florin banknotes. Furthermore, the CBA will hold information sessions for targeted groups and will provide information materials at the MFA’s, the national library, schools, post offices, and commercial banks. With regard to information sessions, the CBA will publish the dates, times and venues in the local newspapers, as well as on CBA’s Facebook, Instagram and website. q