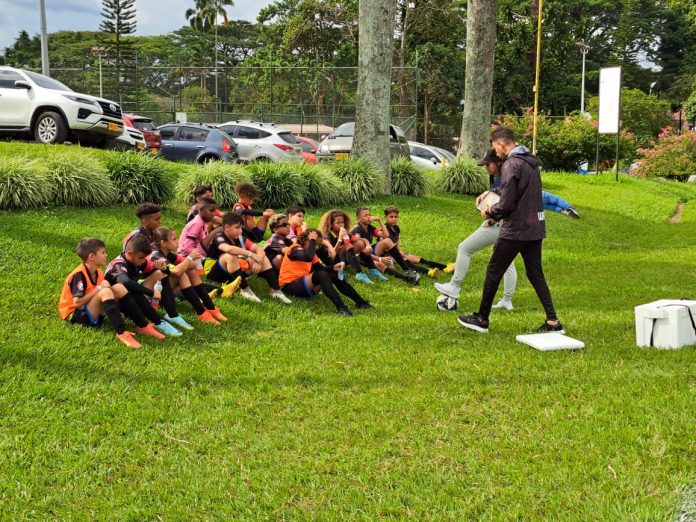 Last week, Team Dreyer Aruba departed to Colombia to represent our island in the tournament Future Soccer Cup, FSC. Yesterday afternoon, Team Dreyer returned to Aruba, and coach Jimena Borja told us about the tournament and how it went for team Aruba.

Borja, who coaches the U11 team for Team Dreyer, explained that the team from Aruba played a total of four official games. Out of these four games they won two and lost two, a very good result for the team seeing as this was their first time traveling and playing internationally.

“We think it is an extremely good result for us. Obviously things could have gone better, but for it to be the first time that we went abroad with the team that has been working really hard these past few months, it went really great”, Borja indicated.

She said that in the last game, Team Dreyer went against Deportivo Pereira. It was an encounter against the U11 team from Pereira, who are the current champions of the top division in Colombia. Team Dreyer tied 1-1 in the game, and then in penalties they managed to win 5-4. “It was an incredible experience for them, especially because they played U11 against U11 for the first time, a very good training”, she emphasized.

Borja added that from what they got to experience, soccer in Colombia is of a very high level. However she is very pleased with the good work the kids did in the challenges they faced.

She also mentioned that the week they spent in Colombia was a beautiful experience both for the players as for the parents, because they got to know each other outside of soccer.

Regarding differences with the Colombian teams and what Aruba can improve, Borja explained that in Colombia, the kids are training to become professionals; this is one of the first things they noticed. She said that she spoke with different coaches and they train with the mentality that the kids have to reach the professional level.

“You can see that they understand soccer in a different way completely. I spoke with different coaches and they are training the kids not for fun, not for hobby, not to keep them busy and out of the house, but they are training them to become professionals and to see soccer as a profession. Perhaps here in Aruba we need to switch the mentality and begin preparing the kids for that”, Borja commented.

Finalizing, Borja said that they are already thinking about the next experience, and now the real work will begin for the next tournament. The team is working towards their next match, but they are sure they will have two international participations in 2023: one in South America and one in North America.

Aruba to me: Chris and Jay Little