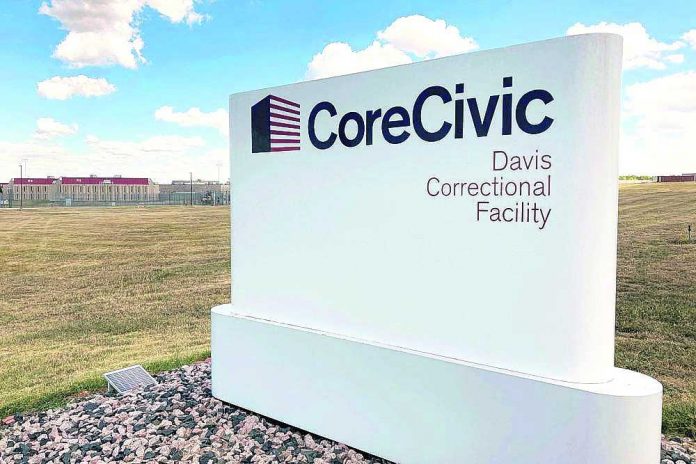 HOLDENVILLE, Okla. (AP) — Working as a prison guard in Oklahoma is becoming an ever more dangerous job as the state, with one of the highest incarceration rates in the United States, struggles with violence and understaffing at detention facilities. Long hours, dangerous conditions and remote, rural locations have meant fewer guards and a system plagued with increased killings and violence.

Three inmates were killed in separate incidents this year at the same private prison in rural, east-central Oklahoma where a correctional officer was fatally stabbed by an inmate over the summer, according to documents obtained by The Associated Press.

Davis Correctional Facility, a 1,700-bed men’s prison in Holdenville operated by Tennessee-based private prison operator CoreCivic, has been operating at only about 70% of its contractually obligated staffing level, according to a 2021 audit of the facility provided to the AP after an open-records request.

Alan Jay Hershberger, a 61-year-old veteran correctional officer from Missouri who previously worked at a CoreCivic facility in Kansas, was traveling to Oklahoma to work at the prison for six-week stints at a time, according to his family. On July 31, Hershberger was supervising about 30 inmates in a recreation yard at the prison when 49-year-old inmate Gregory Thompson walked past him, pulled a 16-inch, homemade knife from his waistband and plunged it into Hershberger’s back, according to an affidavit from Oklahoma Department of Corrections investigator J. Dale Hunter.

“The victim immediately grabbed his side and quickly walked out of the A Unit South door toward a second correctional officer … and collapsed,” Hunter wrote. “The defendant followed behind the victim and began shouting, “On the set” and “On the Crips,” prison slang indicating the action is the responsibility of the Crips prison gang of which the defendant is a validated member.”

Thompson, who is serving a no-parole life sentence for a 2003 murder conviction, has gang affiliation and a history of prison violence, including a 2010 first-degree manslaughter conviction in a case in which Thompson stabbed another inmate to death in 2009 at the Oklahoma State Penitentiary in McAlester. Despite his history, Thompson was held among the general population at Davis Correctional Facility, according to the DOC.

“He should not have been in general (population), knowing how violent he was and his history,” said Jessica Scott, a correctional officer who worked with Hershberger during a six-week stint at Davis. “Administrative segregation is where he should have been.”

Scott, who has worked at two other CoreCivic prisons in Kansas and Tennessee, said the facility at Holdenville had more problems maintaining appropriate staffing levels, cell doors that didn’t lock properly and inmates who were particularly violent and noncompliant toward staff.

“It was by far the worst,” said Scott, who now works at a state prison in Kansas. “There’s a reason I’m not there anymore.”

Thompson has been charged with first-degree murder in Hughes County. His public defenders declined to comment on the case.

CoreCivic did not respond directly to questions about Thompson’s offender-level status or its staffing ratio at the time of the killing, but acknowledged the company is taking steps to improve staffing levels.

“CoreCivic is committed to the health and safety of our employees, the individuals in our care and our communities,” CoreCivic spokesman Matthew Davio said in a statement. “We’re also committed to attracting and retaining qualified, professional staff at Davis. However, both public and private correctional facilities have faced staffing challenges across the country.”

Davio said the company used additional funding this year from the Oklahoma Legislature to increase pay for officers at the facility and also has advertised for openings and launched recruiting efforts at military bases and local colleges. A billboard along a highway near the prison, located 75 miles (120 kilometers) southeast of Oklahoma City, advertises starting pay at $22.10 per hour.