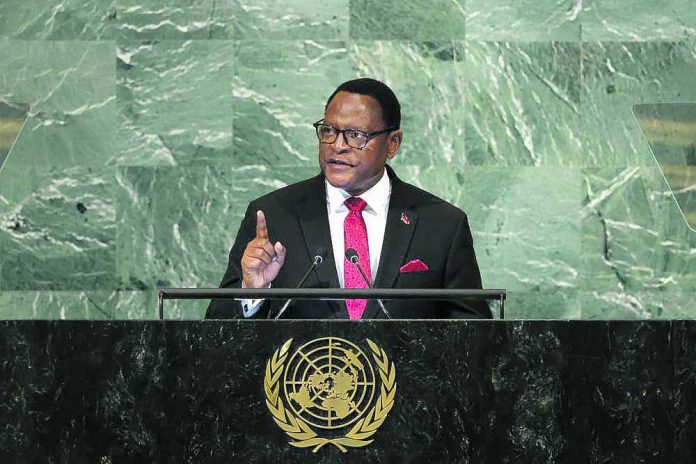 DAKAR, Senegal (AP) — The United Nations was established on one simple notion above all others: Working together is better than going it alone. But while the term “multilateralism” might be trending at this year’s U.N. General Assembly, some leaders are calling out the heads of richer nations.

Whether it’s the global response to the COVID-19 pandemic or climate change, developing countries say it seems that richer nations are thinking of themselves first and not the world’s most vulnerable.

“The global economy is now a house on fire, yet we continue to use evacuation methods that rush some nations out to safety while leaving the rest of us behind to fend for ourselves in the burning building,” said Malawi’s president, Lazarus Chakwera. “But if we are truly one U.N. family, then leaving no one behind has to be practiced, not just preached.”

Tanzania’s Vice President Philip Isdor Mpango was even more blunt. He said that “unilateralism driven by greed is leading us — rich and poor, strong and weak — to a catastrophe.”

When the United Nations was established in 1945, world leaders hoped it would make sure that something like World War II never happened again. Over the years its mandate has tackled everything from nuclear proliferation to protecting refugees. But that high-minded notion of multilateralism has never wavered — even if the reality sometimes has.

Kiribati President Taneti Maamau Beretitenti reminded member states last week that the United Nations’ founders wanted to not only prevent future wars but also “improve the standard of living for all.”

“Today, we take stock of the progress made towards those goals along with new commitments and to reflect and assess if we have truly lived up those values,” he said. Regionalism and solidarity, he said, “are at risk of being increasingly used to serve specific national interests” rather than for the common benefit.

“Broken humanity cannot be fixed by wonderful speeches, meetings, resolutions, nor international instruments, but by an interplay of greater compassion and solidarity,” he added.

Mohammad Niamat Elahee, an international business professor at Quinnipiac University in Connecticut, said most rich countries are giving lip service to multilateralism but are, in reality, acting otherwise.

“When we try to solve it ourselves, maybe in the short term we gain some benefits only for a limited number of people. But in the long run, it becomes worse for everyone,” he said, pointing to the COVID-19 variants that emerged in developing countries after rich countries initially hoarded vaccine supplies.

Multilateralism has taken a steady stream of hits over the past 20 years, from U.S. military interventions to the backlash against globalization. Former U.S. President Donald Trump’s tenure reintroduced an “America First” approach to foreign policy. His administration eschewed the United Nations as an “unelected, unaccountable global bureaucracy.”

Then came the COVID-19 pandemic — a shared global disaster, but also one that exposed how there was enough oxygen for some countries, but untold patients elsewhere would die without.

“The richer nations immediately received vaccines at the expense of the have-nots,” Philippines President Ferdinand Marcos Jr. said last week, echoing the anger of a number of other countries.

Even issues that many countries have rallied around, like condemning the war in Ukraine, feel different to nations whose armed conflicts have not garnered the same international solidarity.

“They should pause for a moment to reflect on the glaring contrast in their response to the wars elsewhere where women and children have died by the thousands from wars and starvation,” East Timor President José Ramos-Horta told the Assembly.

Israel PM: Lebanon responsible for attacks, Hezbollah or not

Miguel Diaz-Canel, 57, selected as next president of Cuba