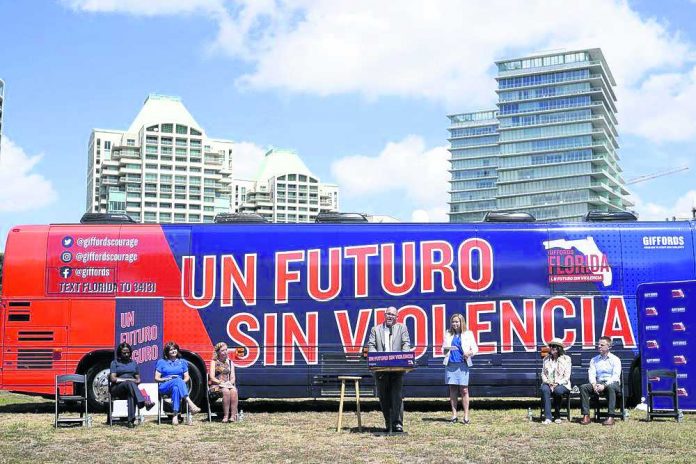 MIAMI (AP) — Annette Taddeo walked to a podium overlooking Miami’s Biscayne Bay and described to her audience how she had fled terrorism as a teenager in Colombia and now feared for the safety of her 16-year-old daughter at an American public school.

A blue and bright orange bus behind the Democratic congressional candidate carried this message in Spanish: “A future without violence.”

“Latinos are here because of the American dream, and it is really hard to do that when you are worried about your kids’ safety,” said Taddeo, a state senator who is challenging a Republican congresswoman, María Elvira Salazar.

Few places disappointed Democrats in 2020 as deeply as South Florida. A shift among Latinos toward the GOP contributed to several unexpected losses in House races and helped then-President Donald Trump carry Florida by more than 3 percentage points.

Democrats are campaigning differently this year as they aim to connect the party’s priorities to the personal experiences of a group that often feels overlooked in national politics.

The effort comes at a volatile moment for Latinos in Florida. Republican Gov. Ron DeSantis has attracted national attention to immigration after arranging to fly a group of Venezuelans from Texas to Massachusetts’ Martha’s Vineyard as part of a state-funded relocation program for migrants who are in the country illegally.

While some Venezuelans and Latinos affiliated with the Democratic party have condemned it as a “cruel stunt,” some exiles applauded DeSantis’ actions. Republican Sen. Marco Rubio of Florida, a Cuban American, wrote a column in Spanish for a conservative online platform seemingly taking DeSantis’ side by raising concerns that migrants crossing into the United States from Mexico could be criminals freed by Venezuelan leader Nicolas Maduro.

Gun violence, meantime, is a particularly powerful issue in Florida, where two of the deadliest mass shootings in recent years have occurred. Spanish-language media have given wide coverage both to the elementary school shooting in Uvalde, Texas, a predominantly Hispanic area, and to the penalty trial of the shooter who attacked a high school in Parkland, Florida, in 2018.

In an Associated Press-NORC Center for Public Affairs Research poll conducted in June, 35% of Latinos named gun issues in an open-ended question allowing people to identify up to five issues for the government to be working on in the next year. That compared with 18% in late 2021 and 10% in 2020.

“This topic has risen in the consciousness of the Latino community,” said Stephen Nuño-Perez, a pollster analyst at BSP Research firm who researches concerns among Latino voters for the National Association of Latino Elected and Appointed Officials (NALEO) Education Fund.

A gun control group founded by former Arizona Rep. Gabrielle Giffords, who survived a 2011 shooting in Tucson that killed six and injured more than a dozen, chose Florida for a state-specific initiative and selected a slate of candidates to support.