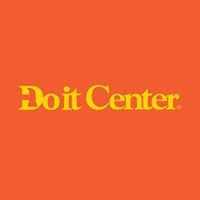 Fishing has been a family tradition for ages in Aruba. Our ancestors used to fish for a living. Even though nowadays you don’t see them often we still have some passionate fishermen on the island that go out every day in search for fish to feed their families and serve our local market. One of these fisherman is Gregory Wernet.

The so-called Continental Bank between Aruba and the opposite coast reaches a depth of about 650 feet. The sea is very rich in fish here. Since the time of the indigenous native people fish and other sea creatures such as turtles, octopus squids, conch and many type of crustaceans have formed a means of subsistence for the native Aruban inhabitants. Especially along the west coast of the island where the fishing grounds are settlements of fishermen. Until the arrival of the oil -industry Aruban fishermen could supply Aruba’s wants.

As a source of income, however, fishing did not amount too much. In the beginning of the 1900’s approximately 160 people earn their living in this branch of this industry. Rancho, which stands for a shed, nowadays east Oranjestad, was the head quarter and remains the fishermen’s settlement. Savaneta, Noord, Santa Cruz all had their fishermen’s villages. At a rough estimate there were about a hundred small fishing boats during that time.

The Arubans were mainly engaged in coastal fishing, using rowing-boats or small sailing-boats, and lines or dragnets and canisters in shallow water. When fishing with deep-sea lines just over the bottom of the sea the boat is kept in place by means of a piece of rock serving as an anchor. The two most important species of fish by far caught in this manner are the pargo or red snappers and a variety of groupers like the mero, jeanpao and the wowo di boyo.

Cruising off the coast the Aruban fisherman patiently waits for a fish willing to snap at the bait on the drag-line, in nets and traps. Veritable giants are sometimes caught. Barracudas weigh from 9 to 44 pounds and measure from 3 to almost 7 feet. The king-fish has a weight from 22 to 44 pounds; the moclat may tip the scales at 155, whilst garfish, having a length of nine feet, weigh over 132 pounds.

Most fish caught is used for their own consumption, to feed their families and some are being sold in the market to local restaurants.

Gregory Wernet is a well-known fisherman from Santa Cruz. His father taught him fishing when he was a small child. Gregory has two sons, Jordan and Jordanny, which he taught fishing too, when they were only 3 years old and he takes them fishing with him. Fishing has been a family tradition for quite a long time and even his grandson Willvion of 7 years old is following his grandfather steps. This is the sixth generation of fishermen in their family.

They go deep sea fishing. There they catch red snapper, grouper and amberjack. They usually fish for 15 hours a day, but now due to the covid-19 measurements they go fishing from 5 in the morning until 8 o’clock at night or even sometimes from 8 at night till 5 in the morning. The day before they prepare all their fishing tools such as the Lines, lures, spears, and load their boat with fishing reels, batteries, fill the gasoline tank, lights and some food and beverages. For bait he uses sardines, squid and the small fish known in Aruba as piskechi. The have two boats they use for fishing. ‘Virgen del Valle’ which is parked at the pier by the Seaport and ‘Padrot’ which they have at home.

The fish they catch they take home to their families and they also sell it to their clients. Gregory is proud to be a fisherman. It is a honest and humble job but with it he is able to feed his family even during hard times. It is a very dangerous job and you have to spend many hours on the sea, waiting patiently and risking your life while fighting a big fish and big waves but the adrenaline it brings with it but also just sitting there listening to the sound of the waves and enjoying the marvelous view that nature has to offer is all worth it. 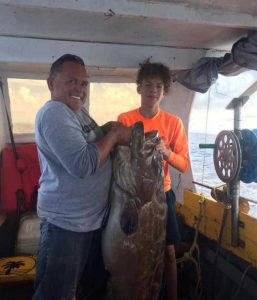 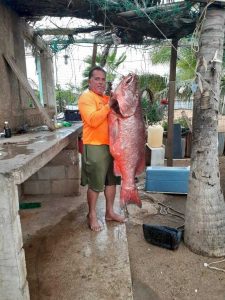 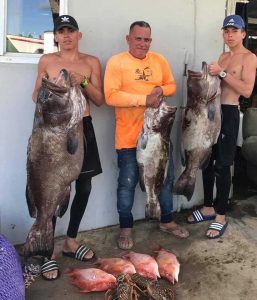 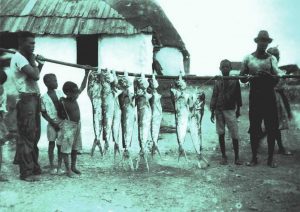