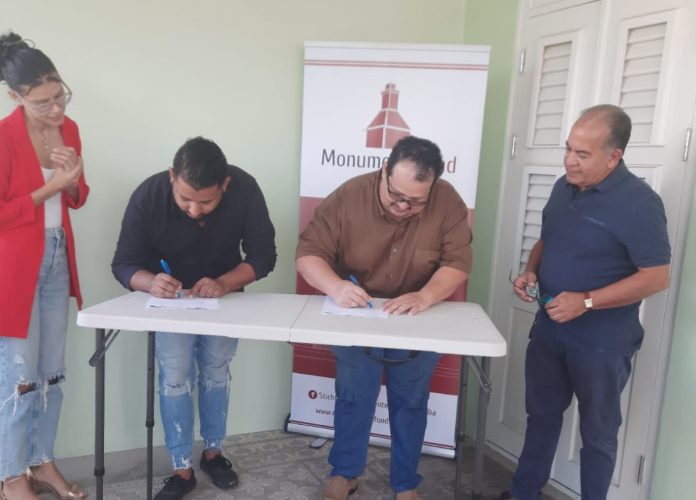 During a press conference yesterday at the building of ex-Botica Aruba on Steenweg 19, a new agreement was signed between Stichting Monumentenfonds and Cocolishi Studios to lease the second floor of the building for a new purpose.

Mircla Nava, PR, marketing & education manager of SMFA explained that in the beginning of December the foundation was already present in Steenweg 19 to announce that the building, which recently was restored by SMFA, will see a new purpose with the restaurant KOAL opening in the beginning of 2023 in the first floor of the building.

She commented that one of the biggest challenges faced by the foundation regarding monuments is to find a purpose for these buildings. In this case, she mentioned that they have a building that is ideal, with two separate entrances, and thus they could combine two different purposes: a production studio and a restaurant.

“What makes us very happy is that the building will also be accessible to the public in the future, seeing the functions that will be taking place in the building, namely a restaurant and production company. This way the history of ex-Botica Aruba will continue for the future generations”, she commented.

The building at Steenweg 19 is a monument from 1925 built by Addison Croes, who together with Gustave Nouel began with the first pharmacy in Aruba that lasted for 50 years, namely Botica Aruba. After the pharmacy closed its doors, it became El Mercado of Palais Hindu. In 2015, Stichting Monumentenfonds Aruba bought the building. For a while it was used as an art atelier by BEAM, and then in 2020 the restoration of the façade began.

Finalizing, Nava said that the following phase after signing the lease agreement will be for SMFA together with Cocolishi Studios to work on the renovation of the interior, so that next year the official opening can take place.