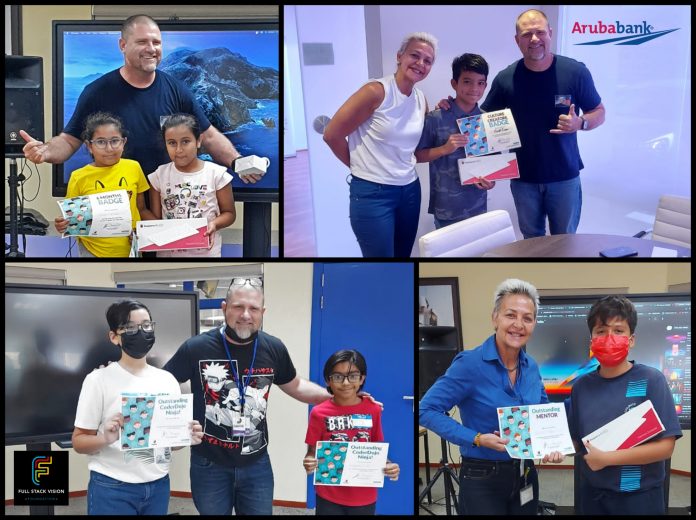 2022 presented the gift that kept on giving for the computer coding kids of the Aru CoderDojo club thanks to the donation of Raspberry Pi computers made by Aruba Bank N.V. to the Full Stack Vision Foundation.

Aruba Bank N.V. (also known as Aruba Bank) donated ten (10) Raspberry Pi single-board computers to Full Stack Vision Foundation of which five (5) were gifted to children of the Aruban community and two (2) were given to Pius X School in Dakota for their students. The Raspberry Pi recipients who are all active Aru CoderDojo club members that have continued to showcase outstanding computer coding skills are the Following: Dacian Coffy, Ruarth Lampe, Harshaan Lulla, Avastha Motyani, and Sehej Motyani. The remaining three (3) Raspberry Pi computers are being utilized during the Aru CoderDojo sessions at both the Oranjestad and San Nicolas locations of the local library, Biblioteca Nacional Aruba.

Aru CoderDojo sessions were actively hosted on a biweekly basis at Biblioteca Nacional Aruba for the entire academic year of 2021/2022 where children of Aruba, ages 7 to 17 years, could attend the club for free. Full Stack Vision Foundation expresses their deepest gratitude to Aruba Bank for the donation of the ten (10) Raspberry Pi computers. Thanks to this gift numerous children of Aruba are continuing to enhance their digital intelligence and computer skills.

Aru CoderDojo marks the official membership of Aruba within the global CoderDojo community. The FREE computer coding sessions that are hosted by Aru CoderDojo are called a Dojo and the participants are called ninjas. During the Dojo, ninjas learn how to code, develop websites, apps, programs, and games, and explore technology in a fun and creative way.